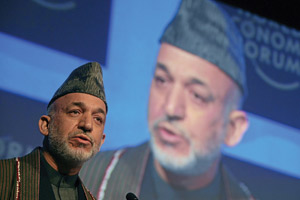 Amid reports of politicians involved with the drug trade, judges accepting bribes, and a military deeply enmeshed in Afghanistan’s thriving black market, the government of President Hamid Karzai has been accused of rampant corruption—graft so widespread that it’s undermining efforts to stabilize the war-torn country. President Obama said in February that Afghanistan’s government had grown “detached” from its own people. And when Obama unveiled his new policy for Afghanistan and Pakistan, his special envoy to the region, Richard Holbrooke, noted that corruption in Afghanistan was one of the most serious issues to resolve. So what can be done to bring dramatic change to the crooked government in Kabul? On Thursday, at a press conference in Washington, DC, one of Afghanistan’s most prominent business leaders claimed that he had a solution for Karzai: The president ought to hire an economic team and tell it, “Advise me on this issue.” This businessman is Karzai’s eldest brother, Mahmood.

Portraying himself to the handful of reporters who showed up as propriety incarnate, Karzai said,  “I’ve been involved pro bono in Afghanistan for seven years.” He then proceeded to devote much of the press conference to defending himself against what he described as a “politically motivated” attack by the New York Times, aimed at undermining his brother’s reelection bid later this year. On March 5, Times reporter James Risen described Mahmood Karzai as “one of Afghanistan’s most prosperous businessmen,” who, after his brother’s rise to power, parlayed his influence to amass a personal fortune. Karzai, visibly bristling at the accusation, used Thursday’s event as his chance to set the record straight.

There’s no question that Karzai’s business interests have grown during his brother’s term in office. At the time of the 9/11 attacks, he co-owned a chain of Afghan restaurants in San Francisco, Chicago, Boston, and Baltimore with three of his brothers. After the US invasion, he returned to his homeland to assist in the reconstruction and today, according to the Times, holds ownership stakes in several of Afghanistan’s biggest concerns, including a cement company, a real estate development firm, a Toyota dealership, the Kabul Bank, and four coal mines. But far from growing rich, claims Karzai, he’s now “$8.5 million in the hole with no income from any salary, capital gains, or dividends to date.” (Even if he’s not making money now, it seems likely that his investments in Afghanistan will pay off down the road.) Asked for proof, he offered to open his financial records to anyone who cares to look. “The idea that the Karzai family should open its books, I absolutely agree…anyone in politics, particularly in a Third World country like Afghanistan, should open their books to the public.”

Karzai is not the only member of his family to have come under fire lately. Qayum Karzai, one of the six Karzai brothers and a partner in the family’s restaurant business, used to hold a seat in Afghanistan’s parliament and became known for his frequent absences. He resigned in October 2008, purportedly for health reasons, after the speaker of the parliament began publishing regular attendance reports. Meanwhile, brother Ahmed Wali Karzai, head of the Kandahar provincial council, stands accused by American officials of involvement in Afghanistan’s booming drug trade. Hamid Karzai has yet to investigate the allegations.

Just as the Bush administration found a willing partner in his famous younger brother, so have capitalists found a reliable friend in Mahmood Karzai. A founder of the Afghan-American Chamber of Commerce, Karzai now heads the Afghan Investment Company, a private investors’ consortium based in Kabul, and splits his time between Afghanistan’s capital city and his home in Maryland. He’s a friend and ally of influential Republicans like former vice presidential candidate Jack Kemp and former congressman Don Ritter of Pennsylvania, who was present at Thursday’s press conference. Long an evangelist for free markets, Karzai looked the part of the jet-setting businessman in a neatly pressed gray, pin-stripe suit and a power tie and peppered his remarks with references to political philosophers like David Hume, John Stewart Mill, and Adam Smith. Echoing the ethos of his Republican friends, he called for lower taxes and touted the efficiency of private business. “The only players who will take the risks and go into a contested area and create jobs, and goods and services for the community, are members of the private sector,” he said.

So why hasn’t Afghanistan’s president acted on his brother’s recommendations? Lack of understanding, Karzai explained. The president “needs great help in the area of economics…I think the US and the West should provide him with advisers.” Particularly in anti-corruption efforts, advisers could do much to turn things around. According to Karzai, the biggest obstacle to stability in Afghanistan is not so much political as economic. People need jobs. Afghanistan currently suffers from 40 percent unemployment. Standing in the way is a reconstruction program riddled with waste and inefficiency. Karzai blamed the US and its NATO allies. “Most of the funds allocated to donor projects are eaten up through paperwork by paper pushers,” Karzai said. “Layers of subcontractors literally buy and sell contracts, skimming the pot, and in the end, only a small portion of the funds go to project implementation. The fact is, corruption is the DNA of the contract and grant economy.”

Near the end of the press conference, Karzai was asked if he felt he’d been libeled by the New York Times in its suggestion that he, perhaps more than anyone, had benefited from his familial connections to the government in Kabul. Yes, he said, and he was considering filing suit against the newspaper. He went on to suggest that his views on Afghanistan’s reconstruction had found a booster in the form of the Obama administration, which he said seems to recognize that “security in the border areas will also be dependent on employment opportunities to compete with gun toting.” Asked if anyone from the White House had contacted him about the way forward, he replied, “No, but they should.”