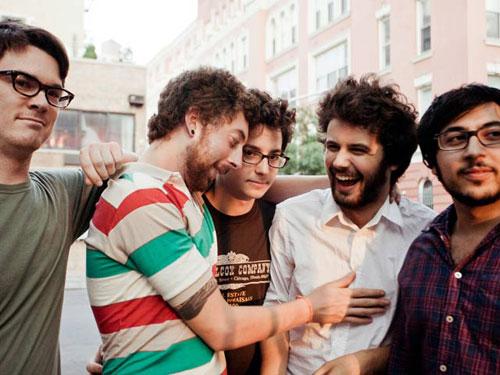 This week, a couple tunes good for indie dance parties, a surprising and hilarious mashup, a Brooklyn duo takes an eventful trip to Times Square, and Kate Bush fans have a new artist to worship.

This Boston-based band charmed me (and lots of other people based on their Top 30 ranking on iTunes) with their quirky “Sleepyhead,” but I was wholly unprepared for the raucous good time that is “The Reeling.” Tinkly ’80s-style synths are offset by stomping rock drums, and the sing-along chorus is irresistible: “Oh, noooo!”

2. Bon Jovi vs. Nina Simone – “Like a Life on a Prayer” (Mad Mix Mustang mashup, download at his web site)

Usually, the point of a mashup is to be amused at the transformation of both sources, but I’d never heard this Nina Simone track before. However, it’s perfect with the Bon Jovi lyrics, and the track ends up sounding like a Mark Ronson souled-up retro-remix, with some Austin Powers silliness thrown in.

Sure, it’s a YouTube stunt, jump out in an apparently freezing-cold Times Square and strip down to the altogether for everyone to see. But the odd emotions on the Brooklyn duo’s faces as the camera lingers on them, and the strange ending, gives the video an obtuse mystery.

The English singer-songwriter otherwise known as Natasha Khan has taken a major creative leap forward on her second full-length, whose title supposedly refers to two sides of her own personality. The album’s stylistic breadth and lyrical coyness is reminiscent of Kate Bush, but “Sleep Alone”‘s shimmering synth lines remind you it’s 2009.

The UK combo were, at one point, on top of the world; “Where’s Your Head At” straddled underground house music and alt-radio like nothing since Daft Punk. But recently, they seemed to have lost the plot, making shrill, nonsensical pop-house. But “Raindrops” is both a return to eclectic, joyous form and a surprising step outside their comfort zone, with weirdly psychedelic and prog-rock touches.