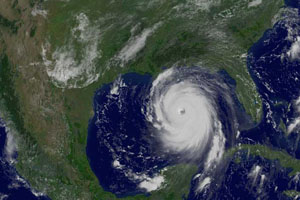 El Niño years typically produce fewer Atlantic hurricanes. But that seems to be changing. According to a report in this week’s Science a new kind of El Niño is appearing, one birthed in the Central not Eastern Pacific. It’s called El Niño Modoki, from the Japanese meaning: similar but different.

What’s different about El Niño Modoki is that its Central Pacific warming is associated with a higher-than-average hurricane frequency and a greater potential for those storms to make landfall along the coasts of the Gulf of Mexico and Central America.

Why El Niño is changing is unclear. It could be part of a natural oscillation of El Niño (the data are sparse before the 1920s). Or it could be El Niño’s response to a warming atmosphere. Pacific trade winds appearing to be weakening, which might account for the warming of the tropical Pacific shifting westward.

The researchers are also currently investigating La Niña, the cooling of the surface waters in the Eastern and Central Pacific. In the past, La Nina was associated with a greater-than-average number of North Atlantic hurricanes. But La Nina seems to be changing its structure as well.

The latest ENSO quick look shows a possible El Niño developing sometime between now and the end of August based on elevated sea surface temperatures across both the Central and Eastern Pacific.