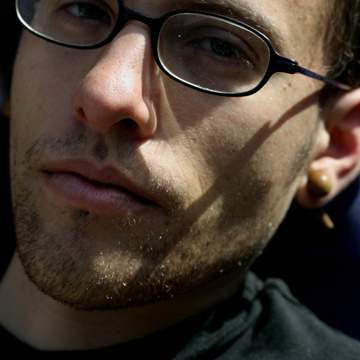 On July 31, three Americans went missing while on a hiking trip in Iraqi Kurdistan. They are presumed to have been detained by Iranian authorities. One of them is Shane Bauer, a freelance journalist who has a piece on contractor corruption in Iraq in the forthcoming issue of Mother Jones. The piece had nothing to do with Iran, and Bauer was not on assignment for us when he went to Kurdistan. Below is a statement by Shon Meckfessel, who was traveling with Bauer, but was not with him at the time of his disappearance.

I’m writing this statement to help people understand what happened to my three friends, Shane Bauer, Sarah Shourd, and Josh Fattal, who went missing by the Iran/Iraq border. I have been close friends with Shane and Sarah for years, and
recently met Josh, a longtime friend of Shane. Shane is a language student and freelance journalist; Sarah is an English teacher; and Josh arranges student exchange trips. All of us have done some writing about our travels, and all of us share a deep appreciation for Middle Eastern cultures.

In late July the four of us decided to travel from Damascus, Syria to Iraqi Kurdistan for a short vacation. Sarah had to return to work in a week. While going there might seem strange to Americans, the Kurdish territory is actually very beautiful and quite safe. Since the Kurds gained autonomy in 1992, no American has ever been harmed there. The city of Sulaimania is increasingly popular with tourists, and a friend of ours told us it was the most beautiful area
he’d ever seen.

We arrived in Sulaimania the night of July 29th and stayed at the Hotel Miwan. Walking around town the next day, we asked a number of people–taxi drivers, hotel staff, and people on the street–for good places to experience the mountainous terrain in the area. Every one of them told us to visit a place called Ahmed Awa. Not one of these people mentioned that Ahmed Awa was anywhere near the Iranian border. In fact, on the wall of our hotel there were three photos of tourists standing near the Ahmed Awa waterfall.

Ahmed Awa seemed the clear choice for appreciating the stunning natural beauty around Sulaimania, far from any sort of risk. However, it may have been unclear to the people who encouraged us to visit Ahmed Awa that we intended to go hiking in the area, rather than simply visiting the waterfall.

There is no Lonely Planet Iraqi Kurdistan, and Ahmed Awa was not on the map we’d printed out. My sense–wrongly as it turns out–was that Ahmed Awa lay northwest of Sulaimania, in the direction of Dokan Lake (and Dokan Resort), another scenic area we’d considered visiting during our trip through Kurdistan.
On the evening of July 30th, Josh, Shane, and Sarah set out for Ahmed Awa with the plan to camp out. I stayed behind at our hotel because I was coming down with a cold, and wanted a night to recuperate. We agreed to meet up the next day near Ahmed Awa. I purchased an Iraqi SIM card for my cell phone to make sure we could find each other the next day (providing the area had a signal,
which very luckily it did).

On July 31st I woke up feeling better and decided to join my friends. At about 11:30am I called Shane. He told me the weather had been mild all night. That morning they had woken up early and resumed hiking along the same trail. Shane sounded very calm and content, happy to be in a beautiful environment, and made absolutely no mention of any risk whatsoever. I am absolutely certain that they had no knowledge of their proximity to the Iranian border or they would have never continued in that direction. Shane told me they were planning to turn around soon. He thought we could meet up near the waterfall. I sent Shane two text messages, one at 12:50pm and one at 1:22pm, to which he did not respond. At 1:33pm I received a call from Shane during which he told me that they were being taken into custody and that I should call the embassy. I hope that people understand my friends’ presence in the area for what it was: a simple and very regrettable mistake. –Shon Meckfessel

Bauer’s story will be arriving in subscribers’ homes next week. We will release it online soon.

UPDATE: On Friday evening it was reported that the three Americans were being moved to Tehran.

UPDATE: Shane’s Mother Jones investigation is here. The hikers’ families have launched a website to build support for consular access to their loved ones.

Monika Bauerlein and Clara Jeffery are the Co-Editors of Mother Jones. You can follow them on Twitter here and here.