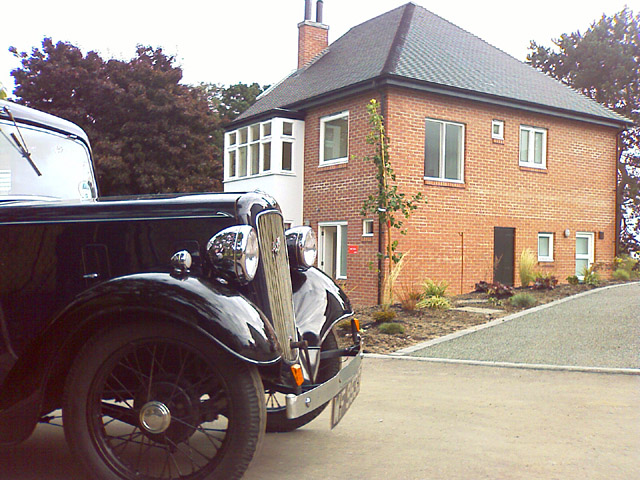 In modern day Nottingham, Robin Hood is robbing the future to pay for the past.

Last year a U of Nottingham crew of merry men and merry women built a 1930s house. Now they’re going to retrofit it with three energy efficiency upgrades designed to convert it from unbelievable energy inefficiency into a zero carbon home meeting the UK’s targets for all new housing by 2016.

The 1930s house is an icon of its age, complete with open fires, single glazed windows, inefficient gas or electric water heating, and no insulation. Three million were built in the UK and are still a major part of current housing stock.

The pimped out 1930s upgrade will bristle with more than 100 sensors to monitor energy use, temperature, and humidity, making it one of the most sophisticated research houses in the world.

During the next 2 weeks the old house will be enriched with modern tech: cavity wall insulation, loft insulation, draft proofing, double glazing, and energy-saving appliances and equipment.

In the end, the house will prove a test facility for measuring which of many energy efficiency upgrades are most cost effective.

In the meantime, U of Nottingham fellow Changhong Zhan and his family have been living in the old house, while researchers monitor their energy consumption and the building’s energy loss.

Apparently, it’s been uncomfortable for the family without central heating. They’ve been dependant on inefficient electrical heaters. To save electricity and money, they’ve stayed in one room, normally the dining room, and subsequently shivered during sleep and showers. They’ve used hot-water bottles to keep warm and save electricity (hey, I like hot-water bottles). To stifle drafts, they’ve squeezed papers into gaps in windows and doors.

When the researchers tried to pressurize the house to find the areas of worst heat loss, they couldn’t, because the house was too full of holes.

Millions of Britons live in similarly leaky homes, adding significantly to the third of CO2 emissions caused by housing in that country.

Lots of American homes leak too. Where’s our Robin Hood?