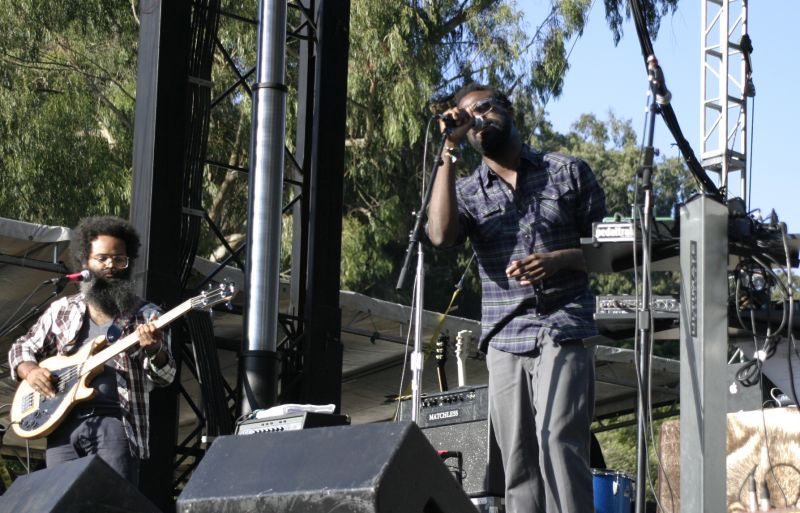 TV on the Radio's Tunde Adebimpe and Kyp Malone at San Francisco's Outside Lands festival. Photo by Andy Kroll.

San Francisco’s Outside Lands festival, spanning Friday through Sunday here in idyllic Golden Gate Park, had something of a split personality disorder. The festival’s two main stages, as this map shows, occupy opposite ends of the festival’s vigilantly guarded fenced-off area—and as far as Friday and Saturday’s shows went, the contrast in each stage’s fare couldn’t be more stark.

On Friday, rockers of various stripes held court at the main stage at the Polo Field, from Built to Spill and Silversun Pickups to Incubus and headliners Pearl Jam. Several singers at the main stage, however, were snake-bit that first day, it seemed—both Incubus’ Brandon Boyd and Pearl Jam’s Eddie Vedder sounded hoarse, and both limped through their sets and called on the crowd for help more times than I could count. But while Incubus was hardly spectacular (like their more recent albums), Pearl Jam tore through hit after hit, especially in the set’s second half, when Vedder seemed to loosen up a bit and the crowd chimed in plenty.

The festival’s Twin Peaks stage, a fifteen minute walk to the east, skewed more toward rhythm and hip-hop on Friday. Though I missed Zap Mama, an African- and R&B-influenced group, earlier in the day, by the evening a large crowd had gathered to bob along to rapper Q-Tip and, later, to hear Thievery Corporation close out the first day’s offerings. It was guitars and wah-wah pedals at one end, turntables and samples at the other.

The split was back on Saturday, but with role reversal: the Polo Field took the R&B, soul, and pop, Twin Peaks the rock. No less than Detroit’s the Dirtbombs, the garage rock pioneers boasting two bass players, two drummers, and the irrepressible Mick Collins on vocals and guitar, got the day started around noon at Twin Peaks. Looking back, Mick and the gang set the tone early for the rest of the day, ripping through their 50-minute set at a Ramones-like pace. The band’s characteristic blend of soul-, funk-, and punk-infused rock ‘n’ roll—imagine if MC5 and Motown had a love child—was a great way to kick off the day.

Alhough it couldn’t have been further from vintage Cambodian pop—with a pinch of surf rock. That would describe Los Angeles’ Dengue Fever, whom I heard next. Walking through the clouds of dust to their stage, I thought that I’d heard maybe a song or two of theirs before, but really knew nothing about the band. Which made it pleasantly surprising when Dengue Fever’s lead singer, Cambodian-born Chhom Nimol, launched into the band’s first song (in Cambodian, as many of their songs are) in her spectacularly distinctive voice, which was, unlike the night before, pitch-perfect. Not that I understood a word of what she was singing most of the time. (The band does have a few English songs.) Dengue’s saxophonist, David Ralicke, was phenomenal as well.

More than anything, though, the sheer originality of Dengue Fever’s sound was unshakeable. The group plays a style of music few in this country have ever heard before, and play it well. At a time when one song on the radio is indistinguishable from the next, a band that can make some sound completely new is a refreshing change.

Unfortunately, just as Dengue seemed to be hitting its stride 25 or so minutes in, much of the crowd had migrated toward the Polo Field main stage for Jason Mraz, the first of several pop-ish acts slated to perform there on Saturday. (Oakland’s Raphael Saddiq opened the Polo stage, then Mraz, Black Eyed Peas, and finally the Dave Matthews Band.)

Mraz, however, had scrubbed his act almost entirely clean of his bubble-gum pop sound. With a big band at his back, he dipped more into soul and funk. There were a few exceptions—a recent big single, “I’m Yours,” for one—but other popular numbers, like “The Remedy,” became mellower, reggae-inflected, and stretched out into longer jams. Mraz did get the crowd plenty involved singing along and dancing.

The real action, though, was across the festival at the Twin Peaks stage. There, Brooklyn-based TV on the Radio tore threw an hour-long set from across three albums—and gave the crowd easily the festival’s the best show so far. The sheer energy TVOTR brings to each song is electrifying; they played other favorites like “Wrong Way” and “Wolf Like Me” far faster than the studio version. now backed with a three-piece horn section, TVOTR has never sounded better. Lead singer Tunde Adebimpe, arms flailing, practically howled at times, with a perfect foil in singer-guitarist Kyp Malone’s pitch-perfect falsetto.

Closing the Twin Peaks stage were experimental rockers The Mars Volta. Fronted by singer Cedric Bixler Zavala and guitarist Omar Rodriguez-Lopez, the band’s live (and incredibly loud) rendition of newer songs like “Luciforms” and “Ilyena” were their best since the band’s 2003 hit album “Deloused in the Comatorium.”

But even then, The Mars Volta couldn’t upstage the act that preceded them. While some bands sound best in arenas or intimate clubs or big outdoor festivals, TVOTR can pull off any setting. The horn section, added after the release of the acclaimed Dear Science in 2008, add another layer to the wall of sound and make their show that much better. Midway through the show, Adebimpe told the crowd that Outside Lands would be the band’s last show in a long time. Here’s hoping it’s not too long.