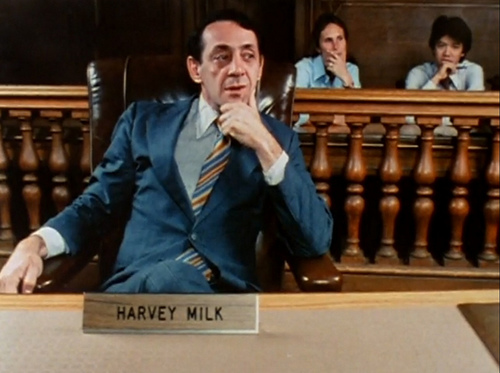 by flickr user Stewf used under the Creative Commons licesnse

In Washington, no one blinked when President Obama chose Harvey Milk, the slain San Francisco councilman and gay rights activist, to receive the Medal of Freedom. But in San Francisco, one man did.

His name is Randy Thomasson, and he heads the conservative policy watchdog Save California. On Wednesday, the group held a press conference outside San Francisco City Hall to protest the honor, spitting distance from where Milk was assasinated in 1978. Using a series of visual aids, Thomasson argued that the civil rights crusader was unfit for the nation’s highest civilian honor.

“Is this for the Onion? Come on, this must be for the Onion,”  a casual observer announced to no one in particular.

That pretty much sums it up. Of the 16 recipients of the Medal of Freedom today—among them Stephen Hawking and Sidney Poitier—perhaps none is more artificially controversial than Milk, whose life and work inspired last year’s Oscar-nominated film. Sure, California’s enjoyed it’s fair share ofreal gay controversy this past year (Prop 8, anyone?). But nothing stokes artificial controversy like TV news cameras.

In a city where every third public building and charity breakfast is named for Milk, the conference was well attended by the local press. All in all, a half dozen showed up, along with a couple of photographers and another ten reporters, who flanked the camera-ready Thomasson and his posse.

“I’m always curious who’s exercising their right to assembly,” said Steven Tritto, an observer who had stepped out to give his maltese Gusto a breather while he waited for a friend at a job interview. “And I’m always interested in who’s getting attention from the media.”

Others were less diplomatic.

In addition to protesting Milk’s Medal of Freedom, Thomasson is also fighting a proposed Harvey Milk Day in California schools, and the “sexual indoctrination of kindergarteners.” He told CBS and MSNBC that the president had made “a mistake” by honoring Milk, one he was anxious  that Gov. Arnold Shwarzenegger not repeat.

“Harvey Milk ‘Gay’ Day will rope school children into confusion,” he said, adding that honoring Milk in California’s public schools “would promote the homosexual-bisexual-transsexual agenda…to up to six million children.”