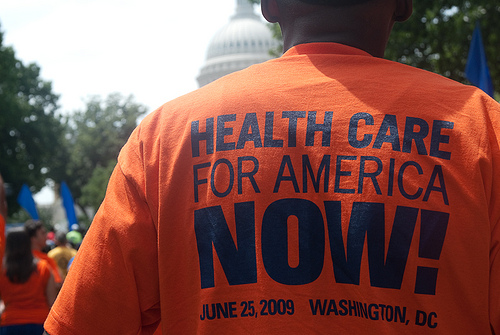 by flickr user indigo_belle used under the Creative Commons license

I was so stoked about Organizing for America’s Office Visit for Health Care Reform, I signed up for the first available appointment. Too bad it sucked.

In case you somehow missed the email, Organizing for America—the vestigial remnants of President Obama’s massive net-roots organization—is SPAMing the flock to visit their senators during the August recess in support of health care reform. The plan is geniusly sticky and simple. You click the link, pick a time you’d like to visit, and print out a map to your senator’s local office, plus a two-page form to record your visit, and viola, CHANGE. It isn’t supposed to be a violently disruptive town-hall meeting, just a group of average, level-headed Americans putting democracy into action through basic civic engagement. Totally rad. Even better, tens of thousands of other people had already signed up to do the same thing, according to Organizing for America. The prospect had me genuinely excited, which is rare for me.

In general, I do my best to avoid overt displays of political activism.  But health care reform was my one big issue, the one I was ready to man the trenches for. When I was eight, the day I was supposed to start 3rd grade, I was struck by a rare illness that left me paralyzed from the waist down. That was September 1994, the same month that President Clinton’s ambitious healthcare plan gasped it’s last breath and died, crushed by reactionary fearmongering, red-baiting, and corporate-sponsored insanity. I’m 23 now, and  the current debate feels like deja vu.

Only this time, I’m one of the millions of Americans with no safety net. In a few months, I’ll lose the coverage my mother extended to me while I was in college. Because of my pre-existing condition, I’m either ineligible for or priced out of private insurance, but since I’m working I’m not eligible for Medicare either. Naturally, I’m interested in a public option.

So too were the seven ageing hippies who showed up just before 9 a.m. at One Post Plaza, home of Senator Dianne Feinstein’s San Francisco offices, cluching their Organizing for America forms and hoping to speak to a policy expert.  After fifteen minutes or so, a flustered young aid named John appeared with a Steno pad and invited us all to step to the other side of the lobby where he collected our forms and repeated some talking points about how Feinstein supports a public option and is waiting to see what comes out of committee.  A few of us shared personal stories, as the form and the email had encouraged us to do, but the whole thing made me feel like an uninvited guest staying for tea.

Compare this with the massive Astroturf machine the GOP has mobilized, and it’s clear why the right is winning this fight no-contest. Even as pro-reform volunteers canvass their neighbors and fill seats at town hall meetings around the country, the left’s leadership can’t get it together. And I had such high hopes.