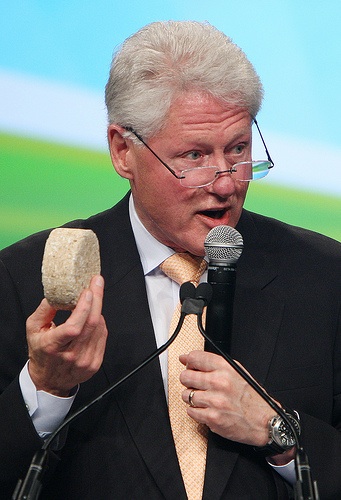 Speaking with a group of bloggers on Monday ahead of his fifth annual summit of leaders from government and the private sector, President Bill Clinton said the US risks looking like “yesterday’s country” if it does not approve a binding limit on greenhouse gases this year. His remarks come just before the United Nations climate summit on Tuesday and the start of the fifth annual meeting of the Clinton Global Initiative. The summit serves as forum for innovators and funders to collaborate on international projects, with a focus on economic development, human rights, health, and environment. Climate change has been among the top issues at the summit in recent years.

“I still think the president should try really hard to pass climate change legislation this year, in addition to health care,” he said. Without passing it, he said, the U.S. will appear “long in the tooth… We need to be tomorrow’s country.”

The key, said Clinton, is to “disprove this myth that still has a grip on many members of Congress, that [action on climate] is a net negative to the economy… It’s a huge myth that still has a stranglehold,” he said, citing nations like Sweden, Denmark, and the United Kingdom who are on a path to meet or exceed their goals under the Kyoto Protocol that have maintained economic stability.

Clinton rattled off potential jobs created by climate policy and the potential of efficiency, noting half of the 2020 emissions-reduction goals that global leaders have discussed could be met by efficiency alone. He said President Obama’s stimulus plan could easily have devoted another $100 billion for those areas.

Acknowledging that many Democrats from coal, oil, and manufacturing states may be hesitant to vote for a bill perceived as a threat to their home-state industries, he said it’s key to show the benefits of climate policy. “The number one thing we have to do is make sure we don’t lose any Democrats because they really actually believe it’s bad economics,” he said. He recalled the BTU tax, backed by his administration, that passed the House without any Republican support as part of a budget bill in 1993, only to be dropped in the Senate. Republicans used the tax as a bludgeon against Democrats who voted for it, using the issue effectively in the 1994 elections that brought the first GOP House majority in 40 years.

“[Democrats] won’t worry about it politically if we can prove it’s good economics,” said Clinton. “We shouldn’t ask them to commit suicide. I wouldn’t want them to do again what they did in ’94.”