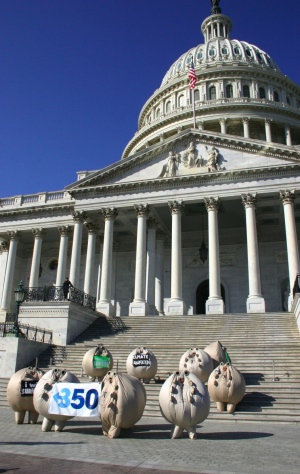 After creating quite the spectacle at the Press Club yesterday, the Yes Men were on Capitol Hill on Tuesday showing off their Survivaball suits to unsuspecting senators and passersby.

The Survivaball, as they describe it, is “the stupidest costume known to humankind,” intended to “highlight the absurdity of the Senate’s slow pace in responding to climate change.” They market the climate-change survival suits to potential customers as a “gated community for one.”

Today’s activities apparently included harassing Arlen Spector (D-Pa.), a senator who has been on the fence about passing climate change legislation this year. From their blog:

At another point, a fleet of Survivaballs chased Senator Arlen Spector outside the Hart Senate Office Building. “Anyone as wishy-washy on climate issues as the Senator, who thinks that clean coal is an answer, needs a Survivaball,” said Ross Finlayson, a top Surviva-model involved in the chase. “Maybe he ran away because he knew that even he couldn’t afford one.”