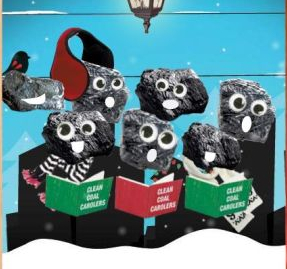 Santa’s on his way, which means it’s time for that great year-end tradition: the listicle! Thus, we bring you the Top 10 Most Evil and/or Ridiculous Things Done By or On Behalf Of Coal in 2009, in descending order.

10. Coal’s favorite congressman, Nick Rahall (D-W.Va.), jumping out of a plane to show his support for coal.

9. Industry group using iStockphotos instead of real people in their “grassroots” FACES of Coal campaign.

7. Handing out coal propaganda to kids.

5. Coal lobby gets more than $60 billion in handouts for “clean” coal in the House cap-and-trade bill while avoiding the vast majority of regulations—but still opposes the legislation.

4. The West Virginia Chamber of Commerce pushing senators to hold health care legislation hostage until the Obama administration ends its “war on coal.”

3. Steve Miller, CEO of Americans for Clean Coal Electricity, the main coal lobby group, appearing to lie under oath about the organization’s views on climate legislation in a congressional hearing.

1. Bonner and Associates sending forged letters to Congress (for ACCCE) claiming to be on behalf of veteran groups, minorities, women, and senior citizens.

Got your own reccomendations? Weigh in below.

While we’re at it, who can forget 2008’s greatest hit, the Clean Coal Carolers? Last Christmas, they brought us delightful hits like “Clean Coal Night,” “Deck the Halls with Clean Coal,” and “O Technology,” at least until some PR person at ACCCE realized what an awful idea this was and yanked them off the internet. Thank goodness Treehugger saved the video for posterity. Here’s my personal favorite, “Frosty the Coal Man”: