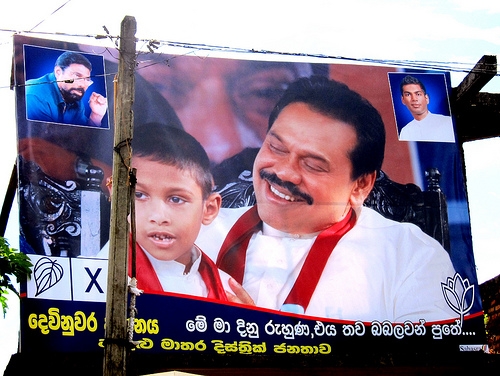 It was quite possibly the most important election in recent Sri Lankan history, the first peacetime vote in more than three decades. Newspapers around the globe reported that 70 percent of the electorate turned out to reelect President Mahinda Rajapaksa in early elections on January 26th. Yet, as one might expect from a country that less than a year ago decisively crushed one of the longest and most violent insurgencies in the world at an enormous cost to human life, elections were fraught. Fraught in a way only Sri Lankan politics would be: challengers lobbing accusations of war crimes at each other; one blocking the other from voting…for himself; and a supposedly king-making minority that never appeared.

Rajapaksa beat his ex-General Sarath Fonseka, who delivered the coup-de-grace in the government’s 26-year-long war with the separatist LTTE (Tamil Tigers) and subsequently suffered a massive falling out with the President, his erstwhile ally. (Both had hoped to ride their post-war popularity into office). Widely seen as the dark horse after he threw his hat in the ring last month, Fonseka was endorsed by Tamil National Alliance and other minority groups; his victory, many felt, would have proved that despite the extreme violence that characterized the LTTE endgame, the Tamils could still be king-makers in Sri Lanka.

In the run-up to the early January 26th elections, riots and civil unrest left 800 injured and at least five dead. Things were worse in the north, where many speculated that the Tamils–a quarter million of them just released from displaced person’s camps in December–would have a hard time exercising the franchise, or for that matter stomaching the choices, even after both candidates made aggressive last-minute attempts to woo them. Voter turnout in the hardest-hit areas topped out at less than 30 percent.  Yet, so far, elections have been strikingly peaceful.

The news has brought Indian Prime Minister Manmohan Singh to the country to plead for a level-headed second term–after all, Singh owes a not-small part of his own recent reelection, in May of 2009, to the South Indian state of Tamil Nadu, home to hundreds of thousands of Sri Lankan Tamil refugees (and many millions of Indian Tamils whose interests are tied up in that of their Sri Lankan neighbors) .

“The peaceful conduct of elections augurs well for the future of Sri Lanka and we hope that the post-election scenario would be free of violence as well,” Singh said in a statement. Let’s hope so.