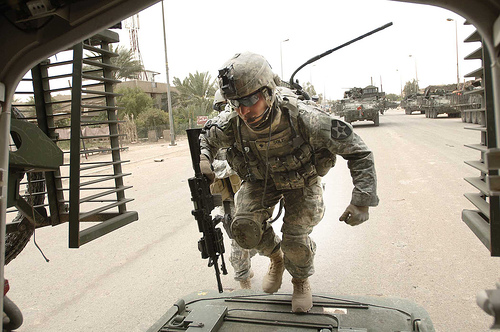 A US Solider in Baghdad in 2007. Flickr/The U.S. Army (Creative Commons)

On a day when there’s nothing but dismal, depressing news on the Obama front, Juan Cole credits the president for what Cole deems his first major foreign policy success: the US drawdown in Iraq. While he acknowledges the presence of US bases there (which will likely never leave), Cole credits Obama for his adherence to a strict timetable for withdrawing American troops from Iraq’s cities despite his generals’ opposition, for turning over security (however feeble) to Iraqi forces even in dangerous regions like Al-Anbar Province, and for essentially ending the war as we once knew it. Cole adds:

Contrary to the consensus at Washington think tanks, Obama is ahead of schedule in his Iraq withdrawal, to which he is committed, and which will probably unfold pretty much as he has outlined in his speeches. The attention of the US public has turned away from Iraq so decisively that Obama’s achievement in facing down the Pentagon on this issue and supporting Iraq’s desire for practical steps toward sovereignty has largely been missed in this country.

Not only will the US drawdown in Iraq greatly improve the image of the US in the Arab world and allow for more cooperation with Arab countries, but it will probably help US-Turkish relations, as well. Turks often blame the US for backing Iraqi Kurds and allowing a resurgence in Kurdish terrorism via the Kurdish Workers Party (PKK), to some 5,000 of whose fighters Iraqi Kurdistan has given safe harbor. The US will soon be out of that picture, and Turks and Kurds will have to pursue their relations on a bilateral basis.

I mostly agree with Cole here. That the US’ actions in Iraq haven’t made major news in quite a while—apart, that is, from their withdrawal from Iraq’s cities—is telling, and Obama does indeed deserve credit for standing up to people like Gen. Ray Odierno and sticking to the Status of Forces Agreement with the Iraqis. It’s probably the best foreign policy move Obama made in his first year as president.

Iraq remains, however, in political turmoil, and Iraqi-led security leaves a great deal to be desired. (The Iraqis do claim to have thwarted another major bombing on their ministries, after several deadly attacks rocked Baghdad last year.) Sure, American troops are mostly removed from the car bombings and violence still rippling through Iraq’s cities, but the turmoil that remains is the US’ legacy. The victory may be Obama’s, but any kind of lasting success seems far off for the Iraqi people.