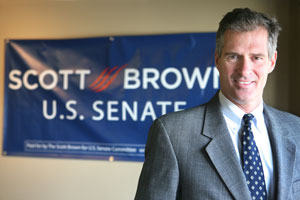 Democrat Martha Coakley was a dud of a candidate in the contest for Ted Kennedy’s Senate seat, but her lackluster performance doesn’t diminish the impact—and implications—of Republican Scott Brown’s upset (and upsetting, for Dems) victory in Massachusetts. “It feels like a cataclysmic event,” says a Democratic pollster with expertise on Massachusetts politics and who asks not to be named because he doesn’t want to be identified in any way with this disaster for his party. Tea Partiers are celebrating Brown’s historic win as a cosmos-altering moment—the Kennedy crown has been wrenched away! Yet this shift in political tectonic plates may signal not so much the rise of the Tea Partiers, but the alienation of the independents—perhaps a more profound problem for President Barack Obama and the Democrats.

Massachusetts is not quite the liberal (or Democratic) bastion it is often caricatured to be. Indies reign supreme, accounting for more than half of the state’s 2.1 million registered voters. Democrats outnumber Republicans three-to-one among residents who declare a party preference, while Republican governors ruled the roost in the state for sixteen straight years. But it’s the indie vote that matters—in Massachusetts and Washington.

Perhaps the most agreed-upon rule of the road among politerati is that candidates win elections by courting the middle. In the last presidential election, Barack Obama bagged 89 percent of the Democratic voters and John McCain nabbed 90 percent of the Republican voters, but Obama bested McCain 52-44 percent among independents. Obama could have lost the indies by a few points and placed first in the popular vote, given that Democrats comprise a larger proportion of the electorate. But the strong independent swing toward Obama rendered his victory a decisive one.

Yet since Election Day 2008, indies have been drifting away from Obama. That makes sense. Independents may lean toward one party or the other, but they don’t have strong roots in either one. They are less likely to feel a partisan or ideological bond with a president. Thus, they will be less inclined to cut their man slack or stand by him when the going gets tough—for the president may not really be their man. (Rabid opposition from the right doesn’t motivate independents to rally around Obama.) And it’s probably fair to assume that many independent voters backed Obama even though his politics were to the left of theirs. So with the unemployment rate remaining high, billions of dollars flowing to bailed-out banks, and the tussle over health care reform looking like an out-of-control mud-wrestling bout, it’s no surprise that some swing voters would lose patience with Obama and his party—just as the obstructionist Republican/conservative opposition was intensifying.

In poll after poll this year, independents have expressed doubts about Obama’s health care reform initiative. Enthusiasm for the project remained high among Democrats, but indies were not so keen. During the months-long, convoluted debate over this complex reform, these voters have been vulnerable to the most virulent GOP talking points: “death panels,” “socialism,” “big government.” Moreover, by fixating on an inside-game strategy to pass health care legislation (negotiate with Baucus, win over Snowe, accept the Stupak amendment), Obama made the whole shebang difficult to comprehend. It’s no shocker that voters who didn’t feel invested in this process would be nervous or suspicious about the outcome. And voter worry can always be tapped or exploited. Even by a former Cosmo naked model. When the president appeared with Coakley at a Boston campaign rally on Sunday, he didn’t once mention his health care reform legislation. He didn’t declare, “Send Martha to Washington so she can vote for this bill.” That was telling. (In the latest NBC/Wall Street Journal poll, only 33 percent say Obama’s health care initiative is a good idea; 46 percent say it’s a bad one.)

Brown’s win in Massachusetts may mark—as the pundits were declaring before the votes were counted—the end of health care reform as we know it. The White House and the congressional Democrats could work out a strategy that saves the bill, with House Democrats holding their noses and voting for the version that passed the Senate, and Obama then signing the measure. That would certainly be a legislative accomplishment, but it would hardly come across as a defining political victory. And the debate over health care (“government takeover!” “usurpation of power!”) will continue straight to the November congressional elections, as now-giddy GOPers make a full play to add skittish-on-Obama indies to their Obama-is-evil base.

Brown’s acquisition of the Kennedy seat is undeniably a symbolic and significant win for Tea Partiers and the Republican Party, which managed to merge successfully during this episode (an alliance they failed to achieve during the special election in September for the House seat in upstate New York). But in this era of volatile politics and hyper-media cycles, it’s merely one battle, not the war. “It’s important to interpret this as a step in the process rather than an end result,” says Kevin Madden, a Republican strategist, who was a senior adviser to Mitt Romney’s 2008 presidential campaign. “As a party we still have work to do if we are to become a governing majority.  The realignment with Main Street sentiments on issues like spending, the economy and national security has begun, and it’s up to us to forge a voter coalition between conservatives and independents.” He adds, “Obama and Democrats have driven independent voters into our hands. We have to work to keep them.”

But the nature of indie voters is that they don’t sit in anyone’s hands for too long. They are never won—and never lost—forever.