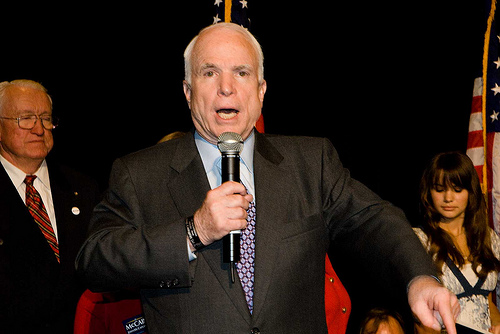 As a presidential candidate, John McCain regularly touted his pioneering support for a cap-and-trade plan to reduce planet-warming greenhouse gas emissions. “I will clean up the planet,” McCain told a New Hampshire crowd during the primaries. “I will make global warming a priority.” In fact, he listed tackling climate change as one of his top three goals as president. And there was reason to believe he meant it. McCain co-sponsored the first cap-and-trade legislation with Joe Lieberman in 2003 and again in 2005. But then he lost the presidency to Barack Obama, and proceeded to throw a hissy fit over plans to regulate carbon that weren’t all that different from ones he’d championed in the past.

Now, McCain has taken his climate climbdown to a new low. He recently told an Arizona conservative talk radio host he “never” supported capping carbon emissions at a specific level—though he at least said he still thinks cutting emissions is a good idea. Via Think Progress, here’s the exchange:

HOST: If we knew then what we know today about these scientists and this fraud, would you still be in favor of capping carbon emissions at 2000 levels?

MCCAIN: I’ve never favored it at a certain level. I’ve favored reducing greenhouse gas emissions for the good of — I mean we all know that greenhouse gases are bad! But I’ve said, in order to achieve that we have to have nuclear power as a component of it.

McCain has been keeping his distance from the Senate climate debate this year, at least in part because he’s facing a challenge from the right for his Senate seat. Conservative former congressman J.D. Hayworth is already making hay of McCain’s support for addressing climate change. But McCain also refused to endorse the 2008 legislation from Lieberman and former Republican Sen. John Warner of Virginia, arguing that it didn’t do enough for nuclear power (though he was not present for the vote on the bill).

In any case, the chances of McCain joining forces with buddy Lindsey Graham (R-S.C.) and Democrats on climate legislation this year don’t look promising.