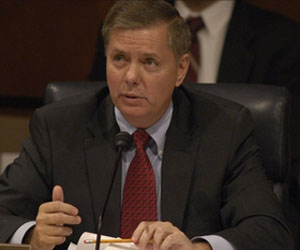 When Sen. Lindsey Graham (R-S.C.) called for legislation last week to cap carbon emissions, he revived hopes that a cap-and-trade measure could pass the Senate this year. (He also got branded a “wussypants” by tea party protesters for his trouble.) But while the support of a prominent conservative senator could pave the way for the passage of climate legislation, Graham’s backing comes at a steep price: he’s pushing for massive payouts to the nuclear industry, along with other environmentally questionable provisions.

While the South Carolina Republican has long acknowledged the scientific evidence for climate change, he’s never been particularly vocal on the issue. Nor is he known for maverick stances: he’s voted the GOP party line 90.7 percent of the time, according to the Washington Post‘s vote-tracking database. Even though he’s Sen. John McCain’s best buddy in Congress (McCain affectionately refers to Graham as his “little jerk”), Graham even voted against a cap-and-trade proposal that McCain introduced in 2003 and 2005. Now, by throwing his weight behind climate action at a critical juncture, Graham has become a key power broker on the issue practically overnight.

But he wants something in return. The New York Times op-ed Graham co-authored with Sen. John Kerry (D-Mass.) makes it clear that there are a number of issues motivating his unexpected move: the looming Environmental Protection Agency regulation of carbon dioxide under the Clean Air Act, growing awareness that climate change is a national security concern, and fear that inaction threatens America’s economic future. But most of all, Graham appears to see the bill as a major opportunity to advance the cause of nuclear power.

Graham has been among the Senate’s leading proponents of nuclear power for years, and nuclear advocates have returned the favor. According to the Center for Responsive Politics, SCANA Corp., a Southern utility company with a major focus on nuclear energy, is Graham’s second-highest lifetime contributor, at $95,105. EnergySolutions Inc., a Utah-based nuclear services company, is his fourth largest lifetime contributor, at $54,800. He’s also a favorite of electric utilities, many of which are leading the charge for more funding for nuclear power in a climate bill.

If Graham is able to deliver the goods for the nuclear industry, it won’t be the first time. In 2004, Graham attached a rider to the defense authorization bill that altered the Nuclear Waste Policy Act to reclassify a type of high-level radioactive waste as “waste incidental to reprocessing”—meaning the standards for its disposal were drastically relaxed. The change was made at the behest of the Bush administration’s Department of Energy, and essentially absolved the department from fulfilling a 2003 federal district court mandate to clean up 253 underground tanks containing approximately 100 million gallons of high-level nuclear waste—much of which was disposed of in his own home state. “He got the reprocessing waste reclassified, magically—so it could be dumped into shallow landfills rather than having to be dealt with in a way that reflects how dangerous it is to the public,” says Michele Boyd, director of the safe energy program for Physicians for Social Responsibility.

Already, the pro-nuclear provisions Graham hopes to add to the cap-and-trade measure sponsored by Sens. Kerry and Barbara Boxer (D-Ca.) are worrying some environmentalists. Last week Graham said he wants the bill to put tax credits for nuclear power on par with wind and solar credits. Yet the government already subsidizes nuclear energy more than any other energy industry—it has received $100 billion of taxpayer money in the five-plus decades it’s been around. “No one gets anywhere close to the subsidies that nuclear power does,” says Benjamin Schreiber, climate and energy tax analyst at Friends of the Earth (FOE).

For instance, the nuclear sector receives tax credits that are more far-reaching than those granted to the nascent wind and solar sectors. The 2005 energy bill granted the nuclear industry an additional $13 billion in subsidies and tax credits, including a production tax credit in effect until 2021. By contrast, the renewable energy sector has struggled to renew their credits—the most recent extension in the stimulus bill applies for up to three years.

Graham also wants nuclear power added to the Kerry-Boxer bill’s renewable electricity portfolio. This concerns environmental advocates because nuclear energy is neither renewable nor a new technology. “Nuclear power is a mature technology that we’ve been subsidizing for decades and shouldn’t be covered in a mandate,” said FOE’s Schreiber. “It should be able to compete on its own by now.”

In addition, nuclear advocates in the Senate favor adding provisions to the climate legislation that would speed up the process for building new nuclear plants. However, environmentalists point out that the Energy Policy Act of 1992 already significantly simplified the permit process. “Any additional streamlining is going to mean shortcuts on safety,” says Kevin Kamps, Radioactive Waste Watchdog at Beyond Nuclear. A coalition of 14 environmental groups, including FOE, Beyond Nuclear, Sierra Club, and the Natural Resources Defense Council (NRDC), delivered a letter to senators on Thursday opposing any more attempts to pare back permitting procedures. The letter asks senators to “reject any provisions that would further undermine the Nuclear Regulatory Commission’s (NRC) existing, truncated licensing process for new reactors.”

On the whole, however, environmental groups have been noticeably mum on Graham’s nuclear demands. Last year, a coalition of ten environmental organizations sent a letter to senators criticizing attempts to add more nuclear pork to the Climate Security Act. This time around, most groups have been hesitant to criticize the nuclear components that Graham and others Republicans are seeking—most environmental organizations contacted by Mother Jones declined to comment on Graham’s nuclear requests.

Advocates of the climate bill are likely staying quiet because they’re hoping Graham will forge a path to securing 60 votes in the Senate for the climate bill. He could entice other sympathetic Republicans to sign on and provide cover for fence-sitting Democrats, many of whom hail from fossil-fuel dependent states. At least 19 Democrats remain undecided. Possible Republican supporters include McCain—another prominent nuclear advocate—as well as Olympia Snowe and Susan Collins of Maine, Lamar Alexander (Tenn.), Dick Lugar (Ind.), Judd Gregg (N.H.), Lisa Murkowski (Alaska), and George Voinovich (Ohio), among others. “Lindsey Graham is someone who really hasn’t been out front on this,” says Josh Dorner, spokesman for Clean Energy Works, a coalition forged among environmental groups to support passage of a climate bill. Advocates also hope Graham’s shift will encourage the White House to step up its involvement. “I think it’s a very clear signal to the administration that they can engage and put together a deal that will in fact get 60 votes,” says Dan Lashof, director of the climate center at the NRDC.

However, a few of the more left-leaning or outspoken groups such as Friends of the Earth and the Union of Concerned Scientists are worried that Graham will pull a bait-and-switch. They fear he’s offering his backing now in order to gain big concessions for the nuclear industry, but won’t ultimately vote for the legislation. Notably, while Graham has voiced support for a climate bill, he has not committed to actually voting for the proposal authored by Kerry and Boxer—who purposely left considerable room for concessions to potential backers. Complicating his position further, Graham said at a townhall meeting in Greenville, S.C., on Monday that one of his motivations in supporting the Senate bill is to overthrow the House-passed cap-and-trade measure. “What I’m trying to do is make sure that the Markey-Waxman Bill from the House is dead,” he said.

“It’s unclear to me that he’s going to sign off on anything, but it’s clear to me that he’s trying to capture as much money for his interests as he possibly can,” says FOE’s Schreiber, who was critical of other environmental groups for not taking a more aggressive stance against the nuclear and fossil fuel concessions under discussion. “They want a cap so badly that they don’t care about the policies that surround it,” he adds. “We think that’s a really flawed strategy.”