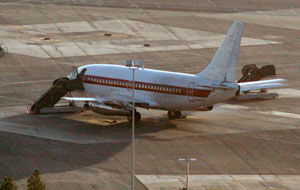 Beth Hawkins has an article in the latest issue of Mother Jones (it’s also in the front-page slider today) about American soldiers who believe they have been sickened by the fumes from military “burn pits,” which are exactly as unpleasant as you might suspect:

In the past 17 months, more than 500 veterans have contacted Disabled American Veterans (DAV), a national nonprofit serving vets, to report illnesses they blame on the burn pits. Throughout Iraq and Afghanistan, contractors—many of the burn pits are operated by companies like former Halliburton subsidiary KBR—have dumped hundreds of tons of refuse into giant open-air trenches, doused the piles with fuel, and left them to burn. The trash includes plastic, metal, asbestos, batteries, tires, unexploded ordnance, medical waste, even entire trucks. (The military now operates several actual incinerators and has made efforts to create recycling programs, but the majority of war-zone trash is still burned in pits.)

What Beth doesn’t mention in her story is that the military’s use of burn pits has a long and fascinating backstory.

Have you ever heard of Area 51? The Groom Lake facility—real-life “Area 51″—is in a region in Nevada where the military tests futuristic aircraft. Secret bases produce a lot of secret trash. For years, the base disposed of most of it in giant burn pits. Last year, Mother Jones’ Dave Gilson reviewed Blank Spots on the Map, a book by artist/geographer Trevor Paglen. In it, Paglen tells the story of a lawsuit brought by workers who claim they were sickened by the burn pit fumes at Groom Lake:

Air Force officers at Groom Lake ordered workers to dig trenches the size of football fields, throw the secret trash into the pits, douse the concoction with jet fuel, and light it on fire. Waste from other secret projects started arriving. On Mondays and Wednesdays, trucks hauling classified detritus from projects based in Southern California made their way to Groom Lake, driving past the dormitories and down a road toward the base of Papoose Mountain. In lieu of shipping manifests, when they had paperwork at all, the drivers submitted documents covered with an indecipherable haze of code names. With each arriving convoy, the workers reignited the toxic fires. The London Fog enveloped the base. Walter Kasza, his friend Robert Frost, and many others worked in the thick of it.

When Frost died from a kidney illness his doctors said was related to the industrial toxins found in his body, his wife, Helen, wanted to file a wrongful death suit against his employer, the Reynolds Electrical and Engineering Company (REECO). She eventually found a Washington-based watchdog group called the Project on Government Oversight to investigate. The case found its way iuto the hands of Georgtown law professor Jonathan Turley. Other workers at the site who’d developed similarly bizarre illnesses joined the class-action suit.

The military, of course, argued that the base “did not exist,” and asserted the so-called “state secrets privilege“—which works as a sort of get-out-of-court-free-card for the government—to prevent the case from moving forward. All the efforts of Turley—who you may have seen on MSNBC—and POGO, a respected good-government group, were in vain. The judge, Philip Pro, had to dismiss the case, writing that “the defendants’ assertion of the military and state secrets privilege prevented the plaintiffs from providing detailed photographic evidence, sealed affidavits, and information in other exhibits.” The Supreme Court later turned down an appeal. You can look all this up. The case is called Kasza v. Browner—most of the plaintiffs were anonymous for security reasons, but since Kasza died during the trial, his name was attached to the case.