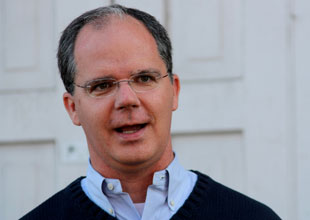 As soon as House Democrats passed their history-making health care reform legislation, Republican leaders launched a comeback strategy: repeal the bill. “This is not the end of the fight, it is the beginning of the fight,” Newt Gingrich wrote on Monday—a call echoed by Republican National Committee chair Michael Steele, Sen. John McCain, and Mitt Romney, as well as legions of disheartened Tea Party activists. Rep. Michele Bachmann and Sen. Jim DeMint quickly introduced measures in the House and Senate to overturn the legislation. But already the repeal-the-bill strategy is running into some trouble.

Take Rep. Brett Guthrie, a conservative Kentucky Republican who has voted with his party over 93 percent of the time. Moments after voting against the bill on Sunday, the first-term representative expressed measured support for elements of the legislation. “We always said there are things that we can all agree on in the bill,” says Guthrie. When asked what Republicans should do next, he responded that he’d support repealing parts, but not all, of the bill—particularly the mandate which requires that Americans purchase health care. Later, Guthrie added that he thought rejecting the entire reform package and starting over would be “the best policy”— but he appeared to regard repealing select provisions of the legislation as the more practical option.

“Then we could preserve some of the things [in the bill] that we all agree upon,” Guthrie says. “I think you saw a lot of us were for [prohibiting insurance companies from denying people coverage for] pre-existing conditions.” Guthrie also points to the House’s 406-19 vote in late February that removed an exemption for health insurance companies from anti-trust laws as evidence that “there could be bipartisan support for incremental health reform.” (That provision was not included in the final health care legislation.)

Before the health care vote, the GOP position was one of all-out opposition to the bill—House Republican leader John Boehner described the legislation as “armageddon” that “will ruin our country.” But Guthrie is not the only conservative expressing qualms about his party’s stampede to reject the legislation outright—raising questions about whether Republicans can pull off a “throw-the-whole-thing out” strategy.

Sen. Scott Brown of Massachusetts, the poster boy for the conservative insurgency, said on Monday that he wasn’t sure whether he’d support overturning the health care law, calling moves to do so “a little premature.” As ThinkProgress* notes, “Rep. Phil Gringrey told CNN’s Rick Sanchez that he ‘does not want’ to throw out everything in the bill, noting there are many provisions—including health insurance exchanges, electronic medical records, greater coverage for dependents, expanded Medicaid, and increased consumer protections—that he supports.” Rudy Giuliani also opposes repealing the bill. And the Chamber of Commerce—the business lobby group which often backs conservative causes and which spent some $144 million campaigning against health care reform—has said it won’t support a GOP effort to throw out the legislation.

Now that the dust is settling from the Sunday vote, some Republicans are likely realizing that pushing to reverse health care reform could be fraught with political hazards. “It’s risky to follow a repeal strategy because average Americans are going to find a number of things in the legislation they actually like; the crackdown on insurance companies will be very popular [and] closing the doughnut hole will be very popular,” says the Brookings Institute’s Darrell West told The Hill. (Not to mention that actually repealing the legislation would require the GOP to capture the two-thirds majorities in both the House and Senate in order to override a presidential veto.) Already, Senate minority leader Mitch McConnell is talking about a “repeal and replace” strategy, rather than trying to argue for a wholesale reversal of the bill. It’s a more complicated position—the question is, will it catch on?

Update: The GOP split over repeal has continued to widen: Senator John Cornyn, chair of the National Republican Senatorial Committee, said Tuesday that Republicans should only focus on repealing the most controversial elements of health reform. Like Guthrie, he maintained that there are provisions worth keeping. And Senators Jon Kyl and Mike Enzi both said that partial repeal would be a more realistic goal.