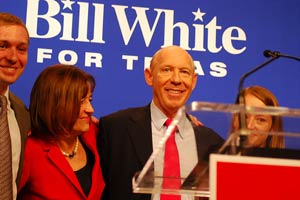 If Democratic lawmakers have their way, the Texas State Board of Education could soon go the way of the Enlightenment and Hip-Hop. Yesterday, state senator Juan Hinojosa announced plans to write a bill eliminating the board, in response to the…ungenerous treatment of civil rights and minorities in the state’s new social studies curriculum. Earlier this month, the board tentatively approved the standards after making a host of controversial changes. Meanwhile, Democratic gubernatorial candidate Bill White (and his gigantic ears!)—widely considered to be the Democrats’ best threat to win a statewide race in Texas since the late Ann Richards—called on his opponent, Gov. Rick Perry, to send the social studies standards back to the drawing board.

Specifically, White wants the professional educators who wrote the more balanced first draft of the standards (before passing it on the board for substantial editing) to have another crack at them. Those are both pretty obvious suggestions: It’s not entirely clear why you’d want a dentist, rather than experts, to have the final say over education policy—or, for that matter, how electing board members locally makes them any more accountable than if the governor appointed them.

So will the charges stick? There’s some reason for optimism. Granted, as the board’s proponents quickly noted, efforts similar to Hinojosa’s have failed repeatedly in the past, so his proposal might be a dead duck. But opposition has been slowly building, both nationally (sparked in part by the not-so-flattering pieces in the New York Times Magazine and Washington Monthly) and at home. In the March primary, conservatives were dealt setbacks in a handful of of SBOE elections, due in part to fears that members’ far-right positions were bad for Texas’ business climate: What kind of family would move to a state with schools like that? And what kind of educated workforce would those schools produce?

Of course, if there’s one thing that can rally the base in defense of the board, it’s something like this: Today, a California state senator from San Francisco announced plans for legislation to ban any textbooks that reflect the Texas SBOE’s curriculum. The standards, said Leland Yee, don’t “reflect California values.” Yeah, that’ll show them.