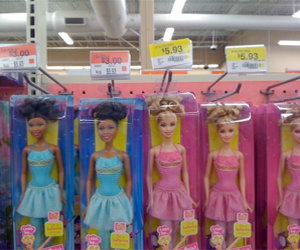 [UPDATE: We’ve followed up on this story here: “Barbiegate: What We Learned”]

Never let it be said that Wal-Mart doesn’t know how to pander for a fast buck. The megachain acknowledged today that it’s selling ethnic Barbie dolls for about half of what it charges for Caucasian Barbies.

The store was forced into the admission after a Louisiana-based shopper posted a photo, seen here, of the diverse dolls—and their respective pricetags—side by side in a Wal-Mart. As the good-humored Latino-interest blog Guanabee put it: “The same exact doll, in Caucasian, commands almost double the price! Who says Barbie dolls don’t supply young girls with a realistic portrayal of womanhood?”

(Interestingly, ABC News reported that the dolls were “black,” while Guanabee called them “brown.” Ambiguity abounds—except for Wal-Mart’s contention that whatever they are, they’re worth less than white ballerinas.)

For its part, the chain said it was selling the darker-skinned Ballerina Theresa Barbie dolls on the cheap because it needs to “clear shelf space for its new spring inventory.” Which must make Theresa feel oh, so special.

No word yet from Wal-Mart, though, on when your kids will be able to find Burka Barbie on your local shelves.

[UPDATE: We’ve followed up on this story here: “Barbiegate: What We Learned”]