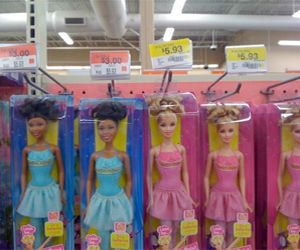 It’s been a busy week for Mother Jones. We’ve been bursting Karl Rove’s bubble of fantasy—again. We’ve exposed more Blackwater hijinks than you can shake an M-16 at. We’ve called shenanigans on the White House’s pointless nuclear-lobby concessions to conservatives.

But for some reason, Barbie was the big hit.

A short note about Wal-Mart selling black and white Barbie dolls, side by side, for different prices, captured a lot of eyeballs yesterday. Along with the ire of regular readers, casual visitors, and grumpy right-wing trolls. Commenting on the piece, one reader, Karenn Sloh, summed up the zeitgeist of the crowd: “Complaints like the one in this article are the reason that liberals don’t get taken seriously.”

Granted! This is a non-story story. A blog post, actually. But it gets written for the same reason that it gets read so widely: It’s a great inkblot test for what’s on people’s minds. Does it say something about race? Sure, even if it’s not anything meaningful, or anything we can really agree on. Is it reason enough to hate Wal-Mart? Depends how you already felt about Wal-Mart. Is it an indictment of the free market? Maybe in a narrow sense—more on that below.

But beyond the race-baiting, the trolls, and the rants, some people made very salient points, and in doing so, they gave the story a life—and a news value—all its own. The real story, it seems, is about competing notions on gender and the free market in our culture.

Let’s look at gender first. In our original post, we quoted the snarky Latino-oriented blog Guanabee, which sarcastically asked, “Who says Barbie dolls don’t supply young girls with a realistic portrayal of womanhood?” One commenter, Da Mama, responded thusly: “Oh yea – a realistic portrayal of womanhood. If Barbie were an anatomically correct person, she would fall over. Her measurements would be 62-24-38. I never let my girls play with Barbies for that very reason. Those stupid dolls are so mis-proportioned, and send the wrong image to young girls.”

It’s a point well taken—one borne out by the fact that, of all the related articles we linked to, the most popular was a 1997 story about tweaks to Barbie’s freakish figure—tweaks that didn’t make it any closer to resembling the women we live and work with every day.

It’s also fitting that yesterday, the New York Times broke a story about Mattel creating Barbies based on characters from the AMC TV series “Mad Men.” According to the show’s creator, Matthew Weiner, the dolls are “a realization of a fantasy, in a weird way,” because “on some level it’s such a measure of success to see your characters embodied by Barbie.” Actually, the fantasy is the fact that the doll representation of Joan Holloway, the TV show’s curvaceous office secretary, conforms to the same impossible proportions as the play doll of Betty Draper, a waifish housewife. Even the varieties of fictional women get lost in Barbie’s world of the homogenized, fantasized femme.

And another one of those fantasies, apparently, is the idea that women are tradable commodities. So said one anonymous commenter to our site: “Nothing nefarious, but it is a funny picture seeing what might look like price tags on girls, and the white girls have a higher price tag than the black girls.” Funny ha ha, or funny strange? Or both?

As long as we’re talking about gender norms, let’s also tip our hats to some commenters on this other blog, who pointed out another reason the white Barbie might sell more units: It’s wearing a pink dress. “Girls,” said one commenter, “are more drawn towards pink and purple dresses than blue”—blue being the color of the discounted ethnic Barbie’s dress. “Stick a pink or purple dress on the other doll and it would sell better too.” Or maybe ask why girls still have to be into pink; notwithstanding some phony-sounding “scientific” rationales for the pink preference, it does seem sort of outmoded and arbitrary.

But beyond gender, one of the big bones of contention for many commenters was that Wal-Mart has the right to charge whatever it wants, and its discount on the less-popular ethnic Barbie was simply a free-market case of supply and demand. Said one anonymous commenter: “To imply that wal-mart is selling these dolls at a lower price due to a racial incentive rather than an business one is absurd. Business operates for its bottom line and reducing a price on a similar item is due solely to its demand, it’s simple economics.”

It’s all true: In the free market, there’s a law of supply and demand, and in a democracy, a firm has a right to set its prices according to that law. If anybody thinks Mother Jones has an issue with that reality (you know who you are), they’re wrong. However, that doesn’t mean that we can’t investigate the underlying forces that influence demand or supply in the open market. There’s a disturbing trend in our political atmosphere these days, one that presumes you’re a totalitarian socialist if you voice any skepticism—or in this case, caustic humor—about the fairness or fitness of open markets. Whether we’re talking about Barbies, securitized mortgages, or health care, we should be able to point out quirks in the capitalist system without being labeled anti-capitalism.

Demand for this story, however silly it was, surprised us. We were certainly happy to supply it. That choice still leaves some of our readers scratching their heads. The always-spirited Eddie1247 commented: “Forget about Afghanistan, Iraq, healthcare reform, job losses, this is the real burning issue of our time. I for one will be out in the streets marching to Washington as soon as I can find my shoes.”

Fair enough, Eddie. But as an anonymous commenter pointed out: “Snarky reporting on the fallout effects of racial bias doesn’t prevent discourse about foreign wars or the economy.”

That’s our hope at MoJo, anyway: Come for the Barbies, stay for the investigative reporting. We’re counting on you to let us know how that works!