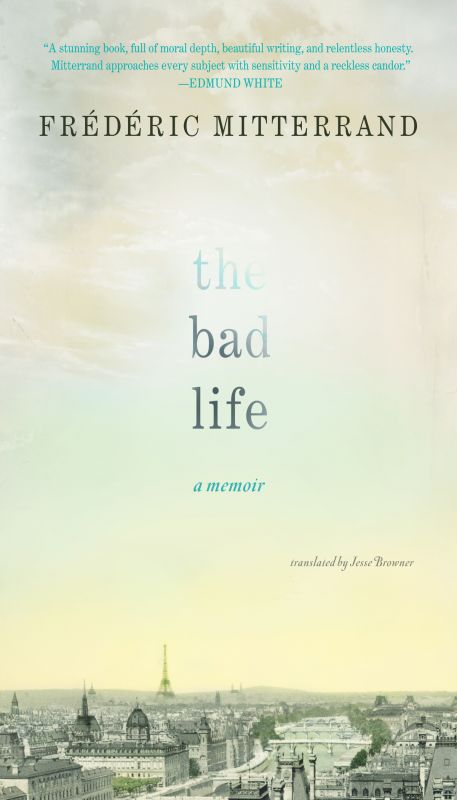 Some controversy has emerged around The Bad Life, a memoir written by Frédéric Mitterrand. Published in France as La Mauvaise Vie in 2005, it has sold over 250,000 copies to date. Known mainly for his career in television—and as the nephew of former French president François Mitterrand—the author was appointed French Minister of Culture and Communication in June 2009 by Nicolas Sarkozy. Then, in October, he was targeted by Marine Le Pen of the right-wing National Front party, who quoted the book out of context on French television, accusing him of paying underage boys for sex in Bangkok and calling for his resignation.

Mitterrand defended himself shortly thereafter, acknowledging that he had indeed paid for sex, but only with unambiguously consenting men of legal age, adding, “I absolutely condemn sex tourism, which is a disgrace. I condemn pedophilia, in which I have never participated in any way. The book is no way an apology for sex tourism, even if one chapter is a journey through that hell, with all the fascination that hell can inspire.”

A fresh chapter emerged earlier this week, however, when Soft Skull Press—publisher of the first English translation of The Bad Life, slated for release on April 20—received news from Mitterrand’s French publisher that his planned US book tour in April would be canceled. No explanation was given other than that it was for political reasons. Soft Skull found that odd, to say the least. When I spoke to Carrie Dieringer, a publicity associate at the publishing house, she was as baffled about this suppression as I was. “Everything was put in motion,” she said, referring to the planned book tour and media coverage. “They knew everything was happening. To cancel things abruptly just doesn’t make a lot of sense.”

Soft Skull stands behinds Mitterrand’s memoir as a “complex, elegant, and introspective work,” and thank goodness for that. The Bad Life is a stunningly candid and beautiful book. Described by its author as an “autobiography which is half real and half dreamed,” it recounts his life as a child of privilege born into Paris’s haut bourgeois sixteenth arrondissement, his experience of homosexuality, and a number of deeply felt personal relationships. Much of this is set in a social milieu of movie stars, politicians, renowned artists, and other public figures. Haute société gossip, however, takes a back burner to a fine literary sensibility that examines life with lucidity, perceptiveness, and humanity.

True, there are a couple of exceptionally frank chapters about paying for sex in France, Jakarta, and Thailand. Mitterrand’s descriptions of Patpong, a notorious red-light district in Bangkok, are occasionally lurid—passages about the pageantry of sex-for-sale that puts him “in a state of desire that I have no need to curb or conceal” are enough to make any moral conservative foam at the mouth (they would much rather have such states of desire curbed and concealed, thank you very much)—but he strikes an impressive balance of savvy, sentiment, and self-deprecation that keep them from sensationalism.

In any case, an examination of complicated emotional and moral concerns about paying for sex is just one part of The Bad Life. Mitterrand writes movingly about a first love who betrays him and with comic self-deprecation about nearly falling into the clutches of a rifle-wielding isolate on a Greek beach. Some of the most memorable, moving passages in the book recount profound connections with other people. The departure of “ageless, heavy-set” Simone, a hired surrogate, leads him to reflect that “children never recover quickly from the feeling of having been abandoned by a kind woman; it is their first step toward death, and it frightens them.” An entire chapter devoted to Howard Brookner—who came to France to show a film he’d made about William Burroughs in one of the art-house cinemas Mitterrand ran at the time—becomes a story of poignant misunderstanding when the author discovers, through a most unceremonious messenger, that this director for whom he’s harbored an attraction for so long has suddenly died of AIDS, explaining his mysteriously withdrawn behavior.

The Bad Life is an intimate, courageous memoir in which Mitterrand is brutally honest not only about himself, but with himself. If it includes a few sordid accounts of a homosexual underworld that some would rather not be asked to consider, it does so within a larger portrait of one man’s life and desires, a nuanced collection of affecting incidents examined with an unsparing eye. It strikes me as bizarre that the French government would pull Mitterrand’s US appearances to avoid any further scandal related to the book. Doing so will surely provide it with an aura of censure, giving legitimacy to their adversaries’ shrill moral outrage (and, really, making it all the more desirable as reading material). They should stand by this artful literary creation rather than shrink before the prurient projections of their political opponents.