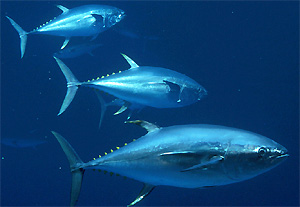 It’s the International Year of Biodiversity. Sad irony in this same year that CITES failed to protect endangered species in desperate need (bluefin tuna, sharks), because their commercial worth was deemed worthier.

At Yale 360, John Waldman writes a compelling and poignant piece about how the natural world vanishes and species cease to matter. He and colleague Karin Limburg have given the phenomenon known as shifting baselines—the fact that each generation encounters degraded environmental conditions it considers “normal”—a new name:

“[We] have come up with another term for the broader context of this phenomenon: “eco-social anomie.” Anomie is defined as a state or condition of individuals or society characterized by a breakdown of social priorities and values. Eco-social anomie describes a biological and cultural feedback loop that spirals toward this breakdown: As species disappear, they lose both relevance to a society and the constituency to champion their revival, further hastening their decline. A vivid example of this was highlighted in a recent study in Conservation Biology, in which researchers found that younger residents along China’s Yangtze River knew little or nothing of the river dolphin, the bajii—now believed to be extinct—and the threatened paddlefish.”

Waldman describes how anadromous fishes—those that migrate between fresh and saltwater environments—have fallen dramatically from our consciousness:

“In the case of migratory fish, their once-vital niche in society is often reduced to vestigial place names, such as the Sturgeon Pool in the Hudson watershed in New York and the Salmon Kill on the Housatonic in Connecticut, which today offer local color—but no eponymous fish. Numerous measures show that the two-dozen migratory fishes of both shores of the North Atlantic have seen profound reduction… Of 35 studies of the long-term fate of migratory fish, relative abundances had dropped below 98 percent from historic highs for 13 species, and below 90 percent for another 11, with most species reaching their lowest levels in recent years.”

In light of the failure at CITES (and Copenhagen), many are seeking a new direction forward, believing we’ve already missed our chance at meeting the loftiest goals for maintaining a thriving world and must now settle for lesser ones. Rob Goldstein at Conservation Maven writes how conservationists are being forced to make difficult choices on where to spend limited resources—a kind of conservation triage. Some are suggesting we focus on species with few relatives and rare genetic lineages:

“Two new research articles take a less common, but compelling, approach to prioritization by focusing on the evolutionary distinctiveness of species—i.e. the extent to which a given species is lacking in close relatives. This phylogenetic approach is based on the idea that maintaining evolutionary diversity should be an important objective.”

Goldstein points to the paper, the Rarest of the Rare in Diversity and Distributions, where the authors have developed a new metric for determining how worthy a species is of receiving scarce conservation funds. Their metric includes genetic isolation and the rarity of species. In other words, evolutionary distinctiveness is definitely worth spending money on—though less so if an evolutionarily distinct species also has an abundant population.

In A Phylogenetic Approach to Conserving Amazonian Biodiversity in Conservation Biology, Colombian researchers found that some of this triage was already happening on the ground in the Amazon. They ranked large areas of rainforest based on their relative conservation importance, specifically on their rates of endemism—the numbers of species occurring only in those areas—and found places with high endemism were already being protected more vigorously than those with lower endemism. Goldstein summarizes:

“The study ended up ranking Guyana and the Brazilian states of Roraima and Amazonas as the most important areas. Interestingly they also calculated the more conventional metric of species richness and found that it gave a similar prioritization of regions. Moreover, their rankings matched up well with where conservation dollars are actually spent.”

That’s a hopeful finding. Conservation triage may be working—at least in the Amazon—at least as well can be expected in a system where some of the patients are going to be left to die.