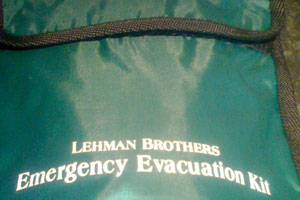 Maybe it’s too early in the election cycle, but I am surprised that Democrats haven’t done more to tie the GOP to Wall Street. Perhaps it’s because the Dems get plenty of money from investment bankers and don’t want to upset donors. In any case, Ohio Gov. Ted Strickland, who is running for reelection this year, seems to be the exception. Strickland’s opponent, former GOP Rep. John Kasich, spent over half a decade as a managing director at Lehman Brothers—the collapse of which helped trigger the recession that’s hitting Ohio particularly hard. Strickland has been slamming Kasich’s affiliation with the investment bank.

Strickland’s strategy seems to be working. The Columbus Dispatch asked Kasich to release his tax returns for all eight years he was at Lehman, but so far the candidate has only released his 2008 return and a 2009 financial disclosure statement. They show that Kasich made $1.4 million in 2008—including $265,000 as a Fox News contibutor and $590,000 (his bonus was $432,000) from the doomed Lehman.

A Kasich spokesman told The Hill that the campaign was releasing the information “primarily to show that he did not profit from Lehman Brothers’ demise.” But that’s not really the point of the Strickland campaign’s attack. Kasich’s background gives Strickland a simple story to sell to voters. While Ohio was suffering through the Bush years and into the “Great Recession,” Kasich was on Wall Street, raking in the dough from a firm that participated (as almost all of them did) in the enormously risky bets that drove the economy to ruin. It’s not that Kasich profited from Lehman’s collapse. He wasn’t short-selling his own bank’s stock (as far as we know.) It’s that he made his fortune and got out while everyone else paid the price for his firm’s bad behavior.

Journalists will likely push Kasich to release the rest of his returns—the limited disclosure definitely makes it seem like he’s hiding something—and then to try to force the candidate to go beyond talking about pay and explain what, exactly, he was doing at Lehman. Kasich claims he was not a top decision-maker at Lehman. So was he the classic ex-politico at the investment bank, a la Harold Ford, basically a lobbyist in disguise? Or was he doing something else entirely?