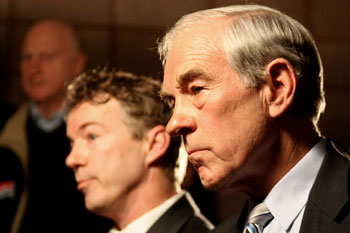 Tuesday was a big day for American politics. You’ll be hearing a lot about the victories for the tea party, but liberal Democrats also did as well as—and perhaps better than—the right-wing insurgents. In some cases—like that of Rand Paul’s win in Kentucky’s Republican Senate primary—tea partiers and liberals were even celebrating the same event. Tea partiers preferred Paul, the son of Texas congressman Ron Paul, to Trey Grayson, the establishment GOP candidate. But liberals were also rooting for Paul, because polling shows that he could be easier to beat in the general election than Grayson would have been.

Liberals had to be happy with some of Tuesday’s other results, too. In Pennsylvania, GOPer-turned-Dem Arlen Specter lost the Democratic primary to Rep. Joe Sestak. In Arkansas, Sen. Blanche Lincoln was not able to avoid a June 8 runoff with union and liberal-backed Lt. Gov. Bill Halter. And in Kentucky, Attorney General Jack Conway—generally considered to be not only more progressive but also a stronger general election candidate than Lt. Gov. Dan Mongiardo—won his primary. Conway will face Rand Paul in November, and stands a decent chance of winning.

Another important win for progressives was in Pennsylvania’s 6th congressional district, where physician Manan Trivedi edged newspaper publisher Doug Pike. Trivedi was a big favorite of the netroots and a member of Daily Kos’ “Orange to Blue” program. He’ll take on incumbent GOPer Jim Gerlach in November.

Tuesday’s big victory for the national Democratic party, however, isn’t as pleasant for liberals. Mark Critz held Pennsylvania’s 12th congressional district for the Dems, filling the seat once held by the late Rep. John Murtha. But Critz is not a progressive—he ran against health care reform and tried to distance himself from President Obama, who has a 33 percent approval rating in the district. Still, Critz is more liberal than the alternative, GOPer Tim Burns. Progressives will take a Democrat who will vote with them some of the time over a Republican who would vote against them on almost everything.

Will liberal wins in May primaries lead to defeats in November? Maybe in some cases, but these aren’t them. Conway and Sestak poll better against their GOP opponents than their less progressive primary opponents did. Trivedi-Pike is a wash. And either Halter or Lincoln is probably cooked in the Arkansas general election against popular GOP Rep. John Boozman. The national Democratic establishment might not be happy about seeing some of their preferred candidates go down, but if anything, Tuesday’s results will help the Dems in November.

Here’s a roundup of some of the other important primary results, including updates on the rest of my 14 House races to watch:

AR-01: Rick Crawford won the GOP primary for the race to replace retiring Rep. Marion Berry. On the Dem side, Berry’s former chief of staff Chad Causey and prosecutor Tim Woolridge will compete in a June 8 runoff, since neither came close to 50 percent.

AR-02: Tim Griffin, a Karl Rove protege who is connected to the US Attorneys scandal, won his primary handily and will await the winner of a Dem runoff between state Sen. Joyce Elliott and state House Speaker Robbie Wills. David Boling, the chief of staff to retiring Rep. Vic Snyder, is out of the running.

PA-03 (GOP): Car dealer Mike Kelly will take on Dem Rep. Kathy Dahlkemper, who could be vulnerable in the fall. Kelly won less than 30 percent of the primary vote against five other candidates. A former city councilman, he was the only Republican in the primary who had held elected office before.

PA-04 (GOP): It turns out that ex-US Attorney Mary Beth Buchanan was badly damaged by her association with Bush-era controversies. Attorney Keith Rothfus crushed her and will face sophomore Dem Rep. Jason Altmire in November. Buchanan’s defeat means a lot of egg on the face for national Republicans—the National Republican Congressional Committee backed her.

PA-07: It will be State Rep. Bryan Lentz (D), an Iraq war vet vs. Pat Meehan (R), another former US Attorney, in the contest for this suburban Philadelphia seat. Joe Sestak used to hold it, but he’s the Democrat’s Senate nominee now, remember?

PA-08 (GOP): It’s a rematch! Former GOP Rep. Mike Fitzpatrick will try to get his job back from Dem Rep. Patrick Murphy, who took it from him in 2006. This one should be great to follow. “Even before the results were in, Murphy—now the incumbent—fired off a letter to Fitzpatrick challenging him to eight debates during the election season. Fitzpatrick shot back saying that eight isn’t enough, and he wants to start the dialogue as soon as next week,” KYW Newsradio reports.

PA-10 (GOP): Tom Marino, yet another ex-US Attorney-turned-Republican recruit, won his primary, and will face incumbent Dem Chris Carney in the fall. But two opponents garnered 58 percent of the vote, and the primary cost Marino a lot of money. National Journal says that he’ll “be nearly broke for the general, while Carney is sitting on $700K in the bank.”

PA-17 (GOP): Rep. Tim Holden could be vulnerable, but State Sen. Dave Argall, the Republican nominee, only barely fended off a Tea Party challenge in his primary. Holden has nearly a million dollars to fend off a challenge and voted against health care reform and cap-and-trade.

KY-04 (GOP): Tea Party candidate Todd Lally won the primary and will take on Dem Rep. John Yarmuth in the fall. The NRCC backed someone else.

KY-06 (GOP): Garland “Andy” Barr will get a shot at taking out three-term Blue Dog Dem Ben Chandler. But Chandler voted against health care reform and has a massive war chest—nearly $1.7 million. That’s a lot of money anywhere, but it will go an especially long way in Kentucky’s media markets.

OR-01 (GOP), OR-05 (GOP): Two members of the NRCC’s “young guns” program (read: candidates anointed by national Republicans) won their respective primaries in the two Oregon districts most likely to be competitive come November. Consultant Rob Cornilles will face District 1 Rep. David Wu, who’s been in Congress since 1998. In the fifth district, Rep. Kurt Schrader will have to fend off state Rep. Scott Bruun. Both GOPers faced Tea Party challenges but won anyway.