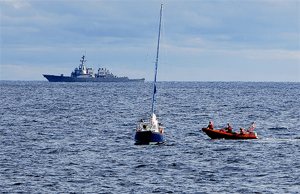 Now we have a leak to go with that spill. It’s been roughly a month since BP’s oil-rig disaster, and as our on-the-ground reporter Mac McClelland showed yesterday, the Gulf of Mexico is now starting to resemble the pit of a Jiffy Lube. There’s been no shortage of opprobrium heaped on the energy lobby and its political apologists of late, with even erstwhile conservatives criticizing the “drill, baby, drill” crowd as anti-environment and anti-economic-prosperity. How could it get worse for (mainly Republican) champions of lubrication laissez faire?

How about if it’s discovered that outer continental shelf drilling is also anti-national-security? That’s exactly what the Department of Defense appears to have done in a leaked portion of its new report (PDF), appropriately titled “Outer Continental Shelf (OCS): Military Activities and Future Oil & Gas Development.” You see, the new conservative Virginia governor and shadow commander in chief, Bob McDonnell, longs to penetrate Virginia’s sea plain with hard probes for profit. His plan was to make 4,500 square miles of ocean available to oil drillers by 2010. But! According to the Washington Post:

The Defense Department report, concluded in March but released in part Tuesday by Rep. James P. Moran Jr. (D-Va.), a drilling opponent, indicates that drilling would interfere with military activities…in 72 percent of the 3 million acres covered by the lease sale and that it could be allowed only with restrictions in 6 percent of the area.

As a former sailor who’s operated out of Norfolk, Virginia—the world’s largest naval installation—I can attest that its sea lanes are rather critical to effective military activities. Ships need to move through quickly and safely when deploying, and that process gets harder when additional surface contacts and navigational hazards are thrown into the brew. (Submarines, which also operate extensively in the area, face a special three-dimensional, life-or-death challenge with undersea drilling infrastructures.) Fleet training exercises, tactical readiness exams, sea trials of new ships, and many other classified but important endeavors begin off the Tidewater coast.

In fact, Norfolk hosts five aircraft carrier groups—one of which, the USS Truman carrier strike group, just departed today for the Persian Gulf. Pretty safe to assume they keep a tight movement schedule to get to a war zone. Do you really want your Hummer’s hydrocarbon hunger to cost them an extra day on that trip?

Now, Big Oil wasn’t totally unprepared for this line of attack. One of its mouthpieces, Securing America’s Future Energy (SAFE), has a report on its website extolling how the military thinks offshore drilling is totally hunky dory for its operations. The report’s military “experts” were retired paid consultants.

But here’s the really fun part: The oil flacks’ report, which was published in January, didn’t focus on the Virginia shore, where it would interfere most with US defense readiness: It focused on the Eastern Gulf of Mexico from Pensacola, Florida, to Key West. Where there’s, you know, an expanding oil plume. Rest assured MoJo will be on the phone to NAS P’cola, Eglin Air Force Base, and NAS Key West next week to see if they’ve scrubbed any flight, surface, or other training ops—or had resources diverted to combat the slick.

This should probably matter to strong-on-defense neocons, paleocons, and the like for obvious reasons of principle. But the GOP also has compelling political reasons to kill the drill: You don’t want to take on the DOD, which usually (and in this case, rightly) gets what it wants. As the AP reports:

The Pentagon cannot unilaterally veto drilling proposals, but Dorothy Robyn, deputy undersecretary of defense for installations and environment, said the Defense and Interior departments have a long history of cooperation, and drilling has never taken place in an area objected to by the military.

“We have every expectation that if we said we need an area … that they would fully honor that,” Ms. Robyn said.