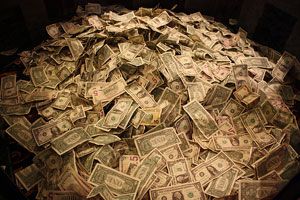 Earlier this week, the National Rifle Association scored a major victory when the gun rights lobby persuaded House Democrats to exempt it from legislation intended to reign in the campaign finance free-for-all ushered in by the Supreme Court’s Citizens United ruling. The move has sent other groups scrambling to create their own carve-outs, ramping up their lobbying efforts on Capitol Hill. Among those seeking a deal of their own are a handful of labor unions, which have largely criticized the Citizens United ruling while also taking advantage of its loosened restrictions.

On Tuesday afternoon, representatives from the American Federation of State, County, and Municipal Employees (AFSCME) met with top Democratic leaders who are involved with the bill, known as the DISCLOSE Act, to push for additional changes that would blunt the legislation’s impact on unions. “I think there’s just overreach in this bill,” said Chuck Loveless, director of AFSCME’s legislative department, who attended the meeting and said that “key people” were involved, though he declined to name them.

While many have warned that Citizens United would unleash a flood of corporate spending in elections by relaxing campaign finance rules, labor unions have been some of the first groups to try out tactics that would have previously been forbidden. AFSCME, along with the AFL-CIO and SEIU, has yet to take a formal position on the bill. Their support, like the NRA’s, could be critical to its passage, particularly since a host of conservative groups have come out against the legislation in the wake of the NRA’s deal. (And 45 liberal organizations have threatened to pull their support from the bill if the NRA exemption isn’t taken out.)

But while the SEIU has suggested that the bill doesn’t go far enough, groups like the AFL-CIO and AFSCME are seeking to roll back some of the DISCLOSE Act’s restrictions and regulations, arguing that unions should be treated differently than corporations. And a flurry of last-minute lobbying over the bill has erupted since news of the NRA’s deal broke on Monday. “Currently we are discussing our concerns with members of Congress,” said AFL-CIO press secretary Amaya Tune. According to Loveless, AFSCME is pushing for two major changes to the bill, which will require campaign ads to disclose all the names of the corporations, unions, and other groups that fund them.

AFSCME is trying to exempt state and local political organizations that accept soft money—that is, unrestricted contributions from individuals or groups—from being regulated under the bill. Under the DISCLOSE Act, such groups, which often receive union backing, would have to disclose their donors if their campaign ads reference a federal candidate. AFSCME opposes having to out itself as the backer of these state and local campaign efforts. “The problem is that we have local union affiliates—we have 4000 of them—that could make a contribution to one of these entities…which could trigger these very detailed disclosure requirements,” said Loveless. He said that AFSCME was “trying to protect these local affiliates” from having to make such disclosures.

Asked whether the new rules might curb union donors’ willingness or ability to influence state and local candidates, Loveless responded that such efforts “have nothing to do with federal elections” and thus shouldn’t be subject to the same rules. (Under the legislation, unions—and any donors that contributed to them—would have to be disclosed if they backed campaign ads in federal elections.)

AFSCME is also pushing back against the bill’s 35 percent tax on soft-money-backed campaign ads—known as “independent expenditures”—sponsored by labor unions and other nonprofit groups that explicitly advocate for or against a candidate. “It’s not just for labor organizations…We have major concerns about this,” said Loveless. The tax would certainly put a damper on the big money that unions have begun pouring into campaign ad buys since the Citizens United ruling came down in January, such as an ultimately unsuccessful $10 million campaing to defeat Sen. Blanche Lincoln in Arkansas’ Democratic primary.

In its current lobbying effort, however, AFSCME is playing down the ways that it and other labor unions have benefitted from Citizens United, insisting that it’s still committed to curbing the excesses of the Court’s decision. Though AFSCME had previously welcomed the ruling—and publicly vowed to avail themselves of the new campaign finance landscape it opened up—Loveless insists that the group never fully supported decision. “We’ve had major concerns with this ruling—it’s not something that we’ve supported,” he said. “Corporations have outspent unions 8-to-1, 10-to-1. We’ve been very critical of the Supreme Court ruling.” Unions like AFSCME argue that they simply want to level the playing field. And that’s why they’re trying to position themselves to take fullest advantage of a post-Citizens United world.