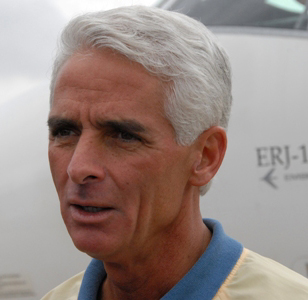 This week, oil from BP’s Deepwater Horizon rig in the Gulf of Mexico is expected to hit the shores of Florida’s northwest panhandle, greasing the Sunshine State’s pristine white-sand beaches in time for the summer tourist season. Already, hotels and restaurants are losing bookings for the coming weeks, though the extent of the BP disaster on Florida’s economy—not to mention its coastlines and the water off its shores—is still unclear.

Leading the charge to assure Floridians and potential tourists that the state is open for business is Republican Gov. Charlie Crist. Crist is a candidate for the state’s open US Senate seat, and he sent ripples throughout the country with his decision in late April to ditch the GOP and run as an independent. Right now, Crist holds a small lead in the polls, edging out Republican (and Tea Party golden boy) Marco Rubio, a former state legislator, and Democrat Kendrick Meek, a US congressman from South Florida. But will the BP oil spill, expected to last until August, sink Crist’s Senate dreams?

Democrats and Republicans alike have lambasted Crist for what they say is his delayed reaction to the spill’s impact on Florida. State chief financial officer Alex Sink, a Democrat, pointed out that it took 32 days for Crist to arrange for TV ads to calm fears about the spill’s toll on Florida businesses. When Crist did obtain $25 million for commercials touting Florida’s untainted vacation spots in the Panhandle, Sink, a 2010 gubernatorial candidate, told the Miami Herald, “I am very disappointed in the lack of sense of urgency about getting this problem solved and getting it solved now.” Republican state senator Don Gaetz echoed Sink’s sharp criticisms, lamenting, “It’s in days like this that I miss Jeb Bush.”

Crist, for his part, has defended himself by pointing to the $25 million ad campaign. (His campaign spokeswoman, Michelle Todd, did not respond to a request for comment for this article.) The state has deployed the Florida National Guard to monitor and blunt the effects of the spill on Florida’s coastline. In a Wednesday press conference, Crist said he had asked US Commerce Secretary Gary Locke to declare a fishery disaster in Florida, and detailed plans to visit Pensacola, a large city in the westernmost corner of the Panhandle likely to be hit first by the spill. He added that thousands of feet of boom had been placed in areas where oil is likely to appear. “It’s easy to try to point fingers and cast blame,” Crist has said. “What’s important is to work as a team…We’re all Floridians, though, and we need to stick together.”

But that was back when it was unclear whether oil slicks would reach Florida. Now, as the spill is set to coat the state’s beaches, the situation is grimmer. Local officials are complaining that BP, while spending hundreds of thousands of dollars on public relations, isn’t paying for Florida’s imminent cleanup efforts. AP reports:

Pensacola Beach officials said their request for about $150,000 from BP to buy sifting machines and a tractor to help remove oil from the beach’s famous white sands has lingered unanswered for more than three weeks. BP has promised it will pay any expenses, but Panhandle officials say the bureaucracy has been slow. Some think the Federal Emergency Management Agency should be running the cleanup operation, not BP.

“We need the sifters and we haven’t gotten them approved yet,” said W.A. “Buck” Lee, Santa Rosa Island Authority’s executive director. “It’s been three weeks and the oil is coming. In my opinion, this entire thing should have been a FEMA project all along. If a hurricane blows the roof off your jail, you shouldn’t have to wait and send a letter to BP to replace the roof on your jail.”

Lee said BP has spent money on public relations, but not on preparations for beach cleanup. The company has provided the state with $25 million to promote tourism. Escambia approved $700,000 in emergency funding for tourism promotion Tuesday, with another $700,000 to be allocated in 45 days.

Not helping Crist’s image at all is Sen. Bill Nelson (D-Fla.), who’s been leading the charge against BP from day one and has set the bar high for all other politicians. Nelson pried the live underwater video feed of the spill from BP’s hands and into the daylight (you can watch it on his website); he co-signed a new piece of legislation called the “Big Oil Bailout Prevention Act” that would increase the economic liability cap for oil spills from $75 million to $10 billion; and his website reads like a breaking news feed on all things oil spill. Held up against Nelson’s crusade, Crist’s efforts so far pale in comparison.

All of which is to say, the outlook is darkening for Florida—and potentially for Crist. Polls by the St. Petersburg Times and Mason-Dixon show that Crist’s lead over Rubio and Meek has shrunk since the spill began, from 6 percentage points to 3. Between May 4 and May 17, as the spill’s extent grew ever larger, two Rasmussen polls likewise showed Crist’s support eroding from 38 percent to 31, with Rubio gaining 5 points over the same period. The longer the BP spill lasts, and the more waves of oil that wash onto Florida’s shores, the more damage will be done to Crist’s image and his shot at winning this fall.