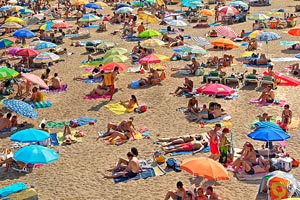 Despite the relentless series of heat waves that has scorched much of the US this month, for many people, sultry summers are a thing of the past: If you can’t stand the heat, just trot over to the thermostat and crank the central air. But as journalist Stan Cox reports in Losing Our Cool: Uncomfortable Truths About Our Air Conditioned World (And Finding New Ways To Get Through the Summer), our heat intolerance comes at a price: Air conditioning currently accounts for almost a fifth of total electricity use in the US, and it creates considerable greenhouse gas emissions—ironically, in making our homes and offices cooler, we’re also making the weather warmer. Cox, who recently imagined what Washington, DC., might be like sans air conditioning in an article he wrote for the Washington Post, believes A/C takes a toll on our social lives, too, and he blames it for the decline of the grand southern tradition of evening porch-sitting. “There’s an estrangement from neighbors and nature as people move their lives indoors,” he says. So what’s a sweltering A/C addict to do? Here are some of Cox’s top tips for going easy on the air:

Tip #1: Switch to compact fluorescent lightbulbs. Not only will you save on your electricity bill, you’ll keep your house cooler. Cox writes that CFLs produce “30 percent as much heat for a given amount of illumination” as their incandescent counterparts.

Tip #2: Make sure your appliances vent outdoors. If your dryer, dishwasher, stove, and other heat-producing appliances expel hot air inside your home instead of funneling it outdoors, your A/C will have to work harder to get rid of that extra heat. If you really want to save, Cox recommends ditching your dryer completely. “Most clothes dryers expel much of their heat to the outdoors,” he writes, “but no indoor heat at all is generated when solar clothes line ‘technology’ is employed.”

Tip #3: Downsize your central air. Some people buy giant central A/C systems, thinking they’ll do the job quicker and more efficiently than smaller versions. That’s not necessarily true, says Cox, so you should make sure your system is the right size for the space you want to cool. Your best bet, though, is to buy a system “that can behave as if it’s large or small, depending on cooling demand.” Smart systems like these have been shown to use 25 percent less energy than traditional central air.

Tip #4: Plant a rooftop garden. As I reported in a previous Econundrum, research has shown that in cities, white roofs can deflect the sun’s rays and lessen the “urban heat-island effect.” But “if you have just an individual house with a white roof in an area with a lot of heat absorbing stuff around it, a white roof is not going to be that effective,” Cox told me. If you live in an area where drought isn’t a problem, Cox believes green roofs are a better bet, since they “have greater cooling potential in the summer, and unlike white roofs, in the winter they don’t reflect heat back.”

Tip #5: Practice being hot. “There is plenty of evidence that exposure to heat increases your physical heat tolerance,” says Cox. “When people spend time under warmer conditions, they become more tolerant. If they are in an A/C bubble all summer they are not as tolerant, mentally or physically.”