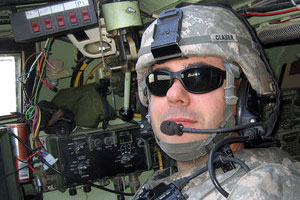 A few folks have been asking me on Twitter, so I figured MoJo readers were owed an update on Michael Clauer, the Texas soldier who lost his $300,000 home over an $800 debt while he was serving in Iraq.

When I wrote about the Clauers’ plight in May, it hadn’t yet received any national attention. But reader response was swift. The article garnered over 650 comments on MotherJones.com, plus thousands more on Huffington Post and other sites that linked to our investigation. Fortunately, this story has a happy ending. [Read the original story here.]

I exchanged emails with the Clauers’ lawyer, Barbara Hale, earlier this month, and she told me the case has been resolved. As of now, it looks like Michael, his wife May, and their two children will get their home back. The financial terms of the settlement are confidential.

The Clauers were saved by a law called the Servicemembers Civil Relief Act, which essentially forbids foreclosing on active-duty troops. If Michael hadn’t been on active duty, the Clauers might not have had any legal recourse. Of course, they really shouldn’t have had to deal with lawyers in the first place. Whatever happened to being neighborly? Here’s an excerpt from the original story:

Michael went on active duty in February 2008 and was sent to Iraq. After he shipped out, his wife May slipped into a deep depression, according to court documents. “A lot of people say that the deployment is more stressful on the spouse than the actual person who’s being deployed,” Michael, 37, says in an interview with Mother Jones. May Clauer had two kids to take care of—a ten-year-old and a one-year-old with a serious seizure-related disorder. In addition, she was worried sick about her husband. Michael’s company was doing convoy security in Iraq—an extremely dangerous job. “It was a pretty tough year for the whole company,” he says. “We had IEDs, rocket attacks and mortar attacks, and a few soldiers that were hurt pretty bad and had to be airlifted back to the States.”

Seeking to avoid hearing about the situation in Iraq, May stopped watching the news. She rarely answered the door, and Michael says he couldn’t tell her when he went “outside the wire”—off-base. May also stopped opening the mail. “I guess she was scared that she would hear bad news,” says Michael. That was why she missed multiple notices from the Heritage Lakes Homeowners Association informing her that the family owed $800 in dues—and then subsequent notices stating that the HOA was preparing to foreclose on the debt and seize the home…. In May 2008, the HOA sold the Clauers’ home for a pittance—$3,500—although its appraisal value was $300,000, according to court documents. The buyer then resold the house to a third person. (Select Management Co., the company that manages Heritage Lakes, declined to comment for this story.)

…At no point did anyone from the HOA—which is, after all, composed of the Clauers’ neighbors—appear to have tried to visit May Clauer’s house to talk to her about the problem. “The HOA board members…don’t live very far from me at all,” Michael Clauer says. There were “neighbors owing much more than us [who] were notified in person of pending foreclosures, but my wife only received a few letters.” David Schechter of the Dallas/Fort Worth television station WFAA, which first reported this story, notes that the “Clauers’ HOA says homeowners are free to call them, but they do not call or visit homeowners when there’s a problem. They’re only required to send a certified letter.”

If folks from the homeowners association had bothered to knock on May Clauer’s door, they might have avoided all this—the legal fees, the negative press attention, and the (surely large) settlement costs. But they didn’t, and they paid the price. Fred Rogers would be ashamed.

Here’s an interesting postscript: When I asked whether the homeowners association that foreclosed on Clauer admitted wrongdoing, Hale emailed back “Heck No!” Homeowners associations have enormous power. In 33 states, they can foreclose without a court order over a few hundred dollars in unpaid dues. The process in Texas is especially quick—just 27 days. Texas HOAs have been bedeviled by allegations that they are taking advantage of the law. Some have even been accused of specifically targeting people who own their homes free and clear—like the Clauers did—so that they can flip the house and make a profit. Until the laws are reformed so that it’s harder to take people’s homes over a few hundred bucks, you’re going to keep seeing these sorts of stories. At least this one had a happy ending.

This post has been extended since it was first published.