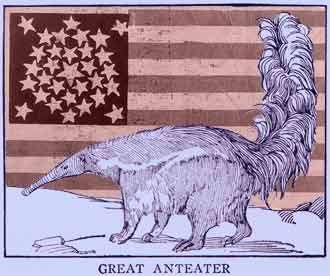 Remixed from Library of Congress and <a href="http://www.flickr.com/photos/perpetualplum/4484838460/#/">perpetualplum</a>

Earlier this week, Senators John McCain and Tom Coburn published a report titled “Summertime Blues: 100 Stimulus Projects That Give Taxpayers the Blues” in which they deem certain projects unworthy of stimulus money. As Newsweek pointed out, in some instances, they seem to be onto something, but in others they appear to have singled out stimulus-backed art and science projects simply for being, well, art and science projects. The Huffington Post did a nice job showing the list’s bias against stimulus-backed art, but besides a short article from the AAAS, little has been said about the senators’ ill treatment of science.

Consider the sixth entry on the list—a California Academy of Sciences project that received $1.9 million in stimulus money to send scientists to the southwest Indian Ocean islands and East Africa to study more than 3000 ant species and publish the information online. McCain and Coburn’s analysis of the project? They called it “arcane.” But it’s no wonder, because they don’t appear to have consulted with a single scientist before drawing their conclusions. Other projects on the chopping block include studying dinosaur eggs in China, weather on other planets, and primates’ responses to inequality. It’s difficult to glean from the report why these particular studies were singled out other than the fact that they were easy fodder for pithy one-paragraph put downs. Whatever the reasoning, the message seems clear: Science that doesn’t have an obvious practical application isn’t worth the taxpayers’ dollars.

How exactly the ant study will translate into practical “stimulus-worthy” benefits is difficult to say, but the researchers did touch on the topic in their grant proposal, where they explained that it will improve scientists’ understanding of evolution in an extremely biodiverse area and inform conservation efforts. The research goals seem a lot less “arcane” when you put it that way. And it’s worth remembering, too, that while this project is located on the other side of the world, it’s not a given that the relevance of its discoveries will be. Implying that research in Africa will have no bearing on lives in North America is like arguing that a fuel injector has no bearing on whether a car wheel spins. In fact, this connectedness between seemingly disparate branches of study and orders of biological life has been one of the great insights of modern science.

But let’s get concrete: Last spring I wrote about the mysterious die-off of more than a third of the nation’s honey bee colonies. The bees are responsible for pollinating 23% of all crops, so their widespread disappearance incited panic. Eventually scientists learned that genetically modified crops, bee pollen diets, the evolution of beekeeping in Europe, pesticides, and myriad other seemingly disparate factors all contributed to the die-off. Research into each one of these topics, no doubt, would have been a candidate for McCain and Coburn’s list had it come along before bees were something we knew we had to worry about. The point is, a lot of scientific research seems hyper-specialized and useless in any immediate sense. And to some degree that’s true. Because, like all things, we don’t need it, until we do.