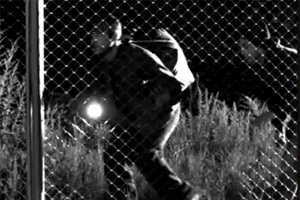 There’s a new campaign to eliminate the I-word from the public discourse, and activists don’t mean “impeachment” or “incentives.” The particular piece of verbiage that has prompted the “Drop the I-Word” campaign is “illegal”—as in “illegal aliens” or “illegal immigrant.” Fed up with a label they say dehumanizes its subjects, campaign promoters ColorLines.com and the Applied Research Center are sending out a pledge and a tool kit to inform people on the negative connotations of the word. “The I-Word creates an environment of hate by exploiting racial fear and economic anxiety, creating an easy scapegoat for complex issues, and OK-ing violence against those labeled with the word,” their site says.

The campaigners’ hope is that like-minded activists will want to educate their neighbors and influence the media frame. The campaign website displays close-up shots of cherub-cheeked children and adults, overlaid with the simple message “I am not an illegal”—along with a video and the endorsements of such organizations as the Nation Institute and Feministing.

The term “illegals” has benefited from an on-the-air spike in 2010, according to TV Trends, a website that maps what’s said on national TV stations. (Surprise, surprise: The top offender by an order of magnitude is Fox News Channel, though CNN and MSNBC moved the needle, too.)

Not that you’d have to pore through tons of TV show footage to see the I-word in action: If you’re in Nevada, you’re hearing it a lot, in the form of a TV ad for the Senate campaign of Republican and tea-party darling Sharron Angle. In Angle’s world, people in Nevada struggle with unemployment, and it’s the fault of “illegals” who sneak across the border in the middle of the night to take advantage of the US’s social programs. “HARRY REID,” the ad narrator concludes, “the best friend an illegal alien ever had.”

It’s easy to see why an immigrant—or anyone who could be mistaken for one—would feel vilified by the I-word when watching Angle’s propaganda. Even though the ad is against Harry Reid, at least he gets up-close head shots and name recognition. The immigrant characters in the video are rounded up together as a group and remain in the shadows, devoid of individual characteristics. Sort of like…aliens! That “us-them” alienation factor is precisely the Drop the I-Word campaign’s point. “You wouldn’t call someone a w*tback, or the n-word,” its site says. “Saying ‘illegals’ is just as bad.”