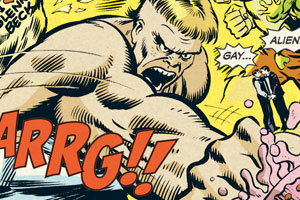 Reprinted from The Adventures of Unemployed Man by Erich Origen and Gan Golan.

EVERY ELECTION produces reams of analysis. Some of it is sharp, some—well, let’s be charitable and say no more. But how can you tell the difference?

One quick way is to look for dumb ideas. Call them memes, urban legends, conventional wisdom. But whatever you call them, they’re ideas that deserve to die. As you plow through this year’s election commentary, here are five to watch out for.

1 Obama has squandered the popularity he built up during the 2008 campaign. This one belongs in the “never deserved to live in the first place” camp. It’s true that Obama has lost popularity faster than his immediate predecessor, George W. Bush. But Obama’s popularity tracked Bush’s almost precisely right through September 10 of their respective first years in office: On that day, Obama’s approval stood at 52 percent compared to 51 percent for Bush. But then, according to Gallup, Bush’s approval rating jumped from 51 percent to 86 percent in the single week after 9/11. That’s the only real difference between Bush’s first two years in office and Obama’s.

And what about presidents whose approval ratings didn’t rocket up after a terrorist attack on American soil? In the summer of their second year in office, Bill Clinton’s approval rating was at 43 percent, Bush Sr.’s stood at 60 percent, the Gipper rated 42 percent, and Jimmy Carter 39 percent.

And Obama? Forty-five percent. So there’s just nothing very unusual here. This is what happens when a president’s honeymoon is over, the economy is in bad shape, and the opposition noise machine is in 24/7 attack mode.

Plus, there’s this question to ask about Obama’s sinking popularity: compared to what? In an AP poll (PDF) over the summer, congressional Democrats scored 37 percent, Republicans scored 30 percent, and Congress as a whole scored a dismal 24 percent approval rating. Obama (who in that poll stood at 49 percent) may have lost some steam in the past couple of years, but by a wide margin he’s still the most popular thing DC has going for it.

2 Democrats are in for a November pummeling because they overreached. Or because health care reform is unpopular. Or because it’s just an anti-incumbent year. This one comes in a variety of bipartisan flavors. Conservatives think Democrats are unpopular because they’ve been trying to take over the economy; liberals think it’s because they’ve been too soft on banks. Conservatives think public hostility to health care reform has hurt Democrats; the left thinks it was the lack of a public option that did them in.

Don’t believe it. Journalists love stories, and so do their readers. So we look for narratives to explain election results and opinion polls. But the big picture is a lot simpler.

First, the party in power almost always loses seats in midterm elections, and the more seats they have, the more they lose. In 2006 and 2008, Democrats won a lot of congressional seats in reddish states and districts. In 2010, they’re suffering through the inevitable flip side of holding all those precarious seats.

But even that’s not the most important thing. In the same way that real estate is about location, location, location, elections are about the economy, the economy, the economy. Plenty of research has been done on presidential elections, and the results are pretty unequivocal: The state of the economy plays by far the biggest role. Midterm congressional elections have received less study, but Gary Jacobson, a political scientist at UC-San Diego, has a well-regarded model (PDF) that predicts about 70 percent of the seat changes from one election to another. Its key ingredients are change in disposable income, the size of the current majority, and the president’s approval rating. In other words, maybe a third of this election—at most—has anything to do with Obama’s too-cool demeanor or the “ground zero mosque” or Glenn Beck‘s histrionics.

That’s not nothing, of course. Candidates matter, strategy matters, message matters, and—of course—money matters. It just doesn’t matter as much as most pundits think, and any one of their pet theories probably accounts for no more than a percent or two of the outcome. Mostly, it’s about the fact that when the economy is bad, people blame the party in power.

3 Obama should have focused like a laser on jobs instead of fiddling around with health care reform. To some extent, this is obviously a matter of opinion. If you’re David Brooks and you think the health care bill was a lousy idea, then of course you think Obama should have spent less time on it. But the question is, would that have helped Democrats?

But what could Obama have done to get more people working? Within a month of taking office, he had signed an $800 billion stimulus, 36 percent of which came in the form of tax cuts. Two months later, he announced a rescue plan (PDF) for GM and Chrysler, saving perhaps another million jobs. And later in the year, he proposed a further $200 billion jobs program, using unspent money from Bush’s bank bailout.

It’s an open question whether Obama wanted a bigger stimulus bill in the first place, or whether he would like to pass another one now. The White House carefully refrains from calling any of its current jobs programs a stimulus. But what they call it hardly matters. Republicans have 41 votes in the Senate, and that’s pretty much the end of the story for any program big enough to make a difference. My colleague David Corn is right that Obama’s efforts to trumpet the jobs that his stimulus plan saved or created haven’t connected with the public. But it’s unlikely that flying out to more plant openings, giving more speeches, and generally making it clear that he’s 100 percent focused on employment would have made that much difference. The public doesn’t respond much to speeches; it responds to jobs. And the plain fact is that in the face of GOP obstructionism, Obama and the Democrats in Congress can’t do much about that.

4 The public is terrified of budget deficits and has turned against vast government spending programs. You could be forgiven for believing this. Everyone from Fox News to the Washington Post insists it’s true, and even President Obama seems to buy into it. That’s why he set up a commission charged with producing a deficit-reduction plan soon after the November election.

But what about the public? The most vocal deficit hawks are in the tea-party movement, but when the New York Times asked earlier this year what issue made them angriest, only 5 percent of tea partiers said it was the deficit. Asked to choose between cutting the deficit and cutting taxes, a majority chose tax cuts. The same Times poll showed that 9 percent of Americans (and 11 percent of tea partiers) said government spending was their biggest flash point. That’s still not very high. And when you ask people what they want to cut, the only thing a majority can agree on is foreign aid—which accounts for a grand total of 1 percent of the budget.

Conservatives have gotten a lot of mileage out of the deficit. It’s a pretty good, all-purpose way of attacking virtually anything that Democrats propose, and that makes it effective politics. No one should blame them for making as much hay with it as they can. But are people really angry about spending and deficits? The evidence just doesn’t support it.

5 A big loss in November means Obama is a one-term president for sure. Please. Bill Clinton got pummeled in 1994 and won reelection easily in 1996. Ditto for Reagan in 1984. In politics, two years is an eternity, and Obama has plenty of time to recover from a bad showing this November. Beyond that, just figure the odds. How many times in the last century has a party captured the White House and then lost it only four years later? Answer: exactly once, when Jimmy Carter’s already-bruised presidency ran head-on into the Iranian hostage crisis and a brutal recession. The plain fact is that Americans are almost always willing to give a party at least eight years in the Oval Office before turfing them out. Obama is nowhere near Carter territory yet, and nothing about his temperament suggests he’ll ever get there.

The next two years are going to be tough ones. But opinion polls are fickle and often reflect a bad economy more than they do enduring beliefs. Journalists are addicted to overplaying conflict. The liberal base will almost certainly regain its energy when it’s faced with a real, live Republican opponent. And although conservatives are unquestionably doubling down on the crazy, we’ve seen this movie before, too. The American public was transfixed by the John Birch Society for a few years in the ’60s and transfixed again by the Whitewater crowd in the ’90s. But that stuff doesn’t wear well. Obama probably will.