In “Will Obama Put Up a Fight?” MoJo DC bureau chief David Corn traces how Obama has struggled to connect with voters on their fears and uncertainties about the economy. By spending too much time on health care, underestimating his opponents, and banking too much on banks, Obama failed to engage his base and lost control of the narrative. “It wasn’t just what Obama did, but how he did it,” writes Corn. “He did not effectively present voters with the key question: How would—how could—a post-industrial, post-dot-com, post-Big Finance economy work?” The results from a recent New York Times/CBS poll reveal some of this voter confusion; 57 percent of those polled did not think Obama had a clear plan for solving the nation’s problems, and 53 percent didn’t think he had a clear plan for creating jobs.

Unfortunately for Democrats struggling to engage their constituents on November 2, voter confusion about the economy at election time can actually hurt the economy even more. Dennis Jacobe, chief economist for Gallup, suggests that the mere presence of the midterm elections could have a negative impact on consumer spending and employment. Jacobe points to a graph of the increasing unemployment rate (see below), and writes:

Often, political opponents disagree not only about what has caused the poor economy, but also on how best to get it going again. This political rhetoric may generate even more confusion and uncertainty as the midterm elections draw near and more Americans listen carefully to the political debates. If true, this could mean the economy will get worse in the weeks ahead as political debate exacerbates economic confusion. Of course, whether it means things will get better following the elections is a whole different discussion. 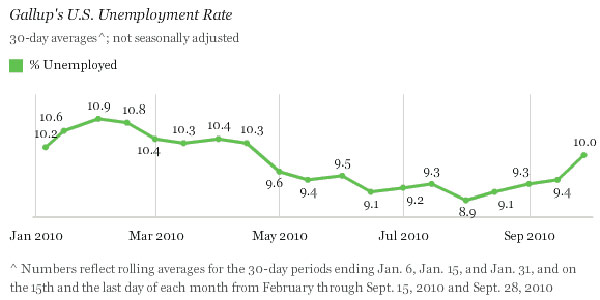