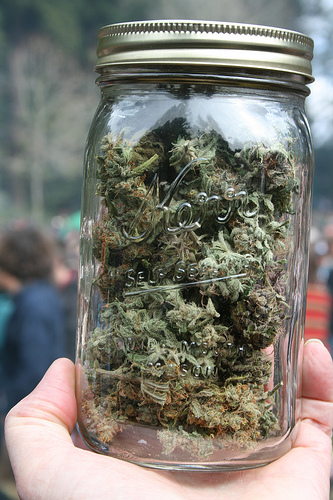 Northern California’s Humboldt County has long been considered the Napa Valley of marijuana. Stoners around the country speak admiringly of “Humboldt dank,” Cypress Hill name-drops “Humble pound weed,” and local grocery stores stock massive displays of odor-sealing “turkey bags” far beyond Thanksgiving. Populated by hippies who fled San Francisco a generation ago to get back to the land,  Humboldt and adjoining Mendocino and Trinity Counties are known as the “Emerald Triangle” for the permissiveness of their pot laws and abundance of their “indo.” So it might come as a surprise that all three counties on Tuesday rejected Proposition 19, a ballot measure that would have legalized marijuana statewide.

“There’s a large movement up here of people who realize that their self interest lies in keeping marijuana illegal,” says Hank Sims, the editor of the North Coast Journal, based in the Humboldt town of Eureka. Growers in the Emerald Triangle’s rugged hills and foggy redwood groves are shielded from the snooping eyes of the DEA, but that advantage would become a handicap if pot could be openly cultivated in California’s warm, flat, agribusiness-dominated Central Valley. North Coast ganja growers “have got government-sponsored price control in the form of busts,” Sims explains. “So I think a lot of people kind of cynically voted their pocketbook and voted to keep it illegal.”

The real surprise is that cannabis cultivators convinced a majority of voters in the three counties (two of which strongly lean to the left) to side with them. “Our export product is weed, by and large,” Sims notes. And in an isolated corner of the state where the timber and salmon fishing industries that once paid the bills long ago collapsed, people who aren’t weed growers are mostly earning their keep by selling things like food, fertilizer and firearms to them. Sims explains: “This is the cornerstone of our economy.”

Of course, the defeat of Prop 19 probably isn’t enough to keep the Emerald Triangle forever awash in green. Cannabis aficionados already bypass the North Coast’s outdoor weed in favor of designer strains with unique flavors and psychoactive effects that are most easily achieved indoors beneath expensive grow lamps. And while hydroponic pot now sells for about 50 percent more than the free-range variety, the price spread is dropping as indoor growers move out of closets and garages and into partnerships with major cities. This year, Oakland plans to authorize four industrial scale pot cultivation warehouses that may corner the market on low-cost, high-quality sensimilla.

Sims believes that the Emerald Triangle could still flourish in the weed world by becoming a destination for marijuana tourism—a place to take in a scenic pot farm and then relax with a joint at a pot-friendly spa. “But for that to happen,” he says, the old growers “have to get out and hustle.” That means “they have to actually be in the system, where the whole appeal in the past was being out of the system. They have to suit up and go around with a sample case from club to club. And that’s going to be hard for people to put their head around.”