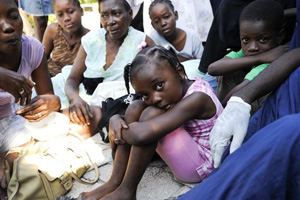 Since I live-tweeted about my day with a rape survivor in Haiti and ran this story about a displacement camp in Port-au-Prince—and now, additionally, there’s the cholera crisis—we’ve gotten a LOT of letters from people who want to know who’s making a difference in the beleaguered country. This info will appear as a handy sidebar in the January issue of Mother Jones, but in the meantime, here are some groups doing great on-the-ground work—plus a bonus charity involving underpants.

KOFAVIV (Commission of Women Victims for Victims) and FAVILEK (Women Victims Get Up Stand Up)
Founded and run by Haitian rape survivors, both of these organizations assist victims with medical, legal, and moral support, in addition to building a movement against sexual violence. Visit them here and (through an American partner) here, respectively.

Partners in Health
The group cofounded by American superdoctor Paul Farmer has been battling health care problems in Haiti since 1987, and now it’s at the forefront of the cholera response. The J/P Haitian Relief Organization, Sean Penn’s charity, is also teaming up with PIH to tackle the disease.

KONPAY (Working Together for Haiti)
Provides assistance and support to grassroots environmental, women’s, and human-rights groups. Since the quake, KONPAY has also fought to get Haitian voices included in foreign-run relief and reconstruction meetings. konpay.org.

Institute for Justice and Democracy in Haiti
In addition to providing legal support to Haitians and creating a force of Haitian human-rights lawyers and advocates with its partner, Bureau des Avocats Internationaux, Boston-based IJDH publishes extensive reports that keep a light on conditions in the displacement camps.

PACT
Somebody gave me a pair of this company’s organic man-panties recently, so I can personally attest to their awesomeness. But more important, every pair you order from the Winter Lights collection gets a solar-powered lantern donated to a displaced woman or family in Haiti.