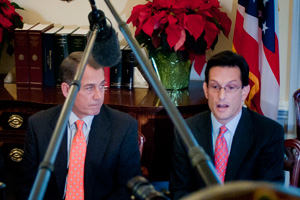 Billionaires are applauding the Boehner era—some of them quite literally. Arriving at the Capitol on Wednesday to witness the Ohio Republican take the Majority Leader’s gavel was Dennis Albaugh, an Iowa business scion known as “the prince of pesticides” and ranked by Forbes as the 105th richest American in 2008. “I’m here to see a good friend, John Boehner,” Albaugh said as he walked through the security gates. Upon taking power, the first order of business for Boehner’s caucus was to make it easier for Albaugh and the rest of the country’s wealthiest individuals and corporations to benefit from tax cuts that don’t have to be paid for.

Boehner’s newly elected Republicans campaigned on nothing short of a revolution in Washington, vowing to reduce the deficit, slash government spending, and balance the budget. But out of the gate, the House majority passed a package of rules on Wednesday that will allow Congress to slash taxes without having to make up for the lost government revenue in spending cuts—a change that Democrats insist could explode the deficit.

Under the Democrats’ “pay-as-you-go” rules—introduced during the Clinton era and continued under President Obama—Congress had to match every spending increase or tax cut with a commensurate spending cut or tax increase. The GOP has now upended “pay-go” with “cut-go” rules, under which tax cuts don’t have to be paid for and tax increases can’t offset spending hikes. “The idea is that the only two things you can do are cut spending and cut taxes,” explains the Washington Post‘s Ezra Klein. The problem is that cutting taxes without paying for them gives the government less to work with when it comes to balancing the budget and reducing the deficit. Effectively, the GOP rules could make it even more difficult to create new government programs, while making it far easier for the GOP to hand tax breaks to corporations and the wealthy.

Republicans maintain that tax cuts won’t actually reduce government revenues—this just weeks after passing a tax cut package with Democrats that everyone agreed cost the government $580 billion that wasn’t paid for. “There’s no relationship—history has shown that when you cut taxes, revenues actually go up,” insisted freshman Rep. Scott Rigell (R-Va.), entering the Speaker’s Lobby outside the House floor for the first time. The Republicans’ argument is that tax cuts will spur economic growth and create jobs—which in turn will raise profits and wages to give the government more revenue, even under lower tax rates. Similarly, Tom Price (R-Ga.) said, “It doesn’t cost the government money to decrease taxes…when you decrease taxes, as President Kennedy proved, as Reagan proved, you increase revenue to the federal government.”

“I think there’s going to be a national drinking game every time the GOP fails to live up to one of their promises,” quipped Rep. Anthony Weiner (D-NY).

While Democrats scoff at this logic, Republicans insist that they’ll be able to hold themselves back from exploding the budget with tax breaks, largely because of the spending cuts they’ll deliver at the same time. When asked whether tax breaks would decrease government revenue, freshman Rep. Austin Scott (R-Ga.) responded: “I guess you could argue that philosophically, but from a practical standpoint in two years, we as Republicans will either have delivered spending cuts or we will not have.” Another frosh—tea party firebrand Rep. Alan West (R-Fla.)—claimed the Republicans would be able to hold themselves back. “We should be able to police ourselves and be a lot more fiscally responsible the way we’ve seen previously.”

But the Republicans have already backed off their promises to slash spending to help cut the deficit. Having originally vowed to cut $100 billion in federal spending in the first year, the GOP leadership has since scaled back its proposed budget cuts. “I think there’s going to be a national drinking game every time the GOP fails to live up to one of their promises…sooner or later, it comes into collision with reality,” quipped Rep. Anthony Weiner (D-NY).

West insisted that the Republicans could still find $100 billion to cut from government. “We could find it…If we really peel the onion back, we could find some place in this huge bureaucracy.” But when pressed to provide a single expenditure that he would like to see cut, he demurred. West, a military veteran, also insisted that military spending should be sacrosanct.

Tea party-backed freshmen are also racheting back their campaign promises to slash and burn government agencies to reduce spending. In a tea party questionnaire, freshman Rep. Steve Stivers (R-Ohio) proposed privatizing the entire Interior Department and claimed only four departments were constitutional. But when asked about his position on his first day of Congress, Stivers immediately backpedaled. “What I said in that questionnaire is that we need to take a look at everything. That’s what we need to do, is to look at everything and see what works,” he said. When asked for specifics, he responded: “We’ve got to look everywhere—we’ve got committees of jurisdiction to look at this.”

The tea party right could ramp up the pressure on the GOP to make good on its promises to slash spending. And there are a few areas—such as health care funding—that could prove especially vulnerable, with some chance of such cuts passing the Senate and becoming law. But the political reality is that cutting spending is always hard, while making tax cuts is easy—and Republicans have made it all the easier.