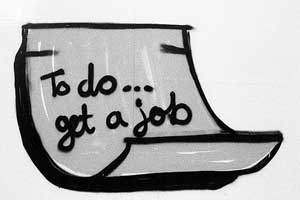 On the jobs front, the month of December was hardly cause for celebration.

According to the Labor Department’s monthly labor snapshot, released Friday morning, the US added only 103,000 jobs in December, all of them in the private sector. While an increase from November’s gains of 39,000, that total is lower than many economists’ projections, which were around 150,000. It’s also nowhere near the amount of jobs needed to put the country on track for a full economic recovery; to do so, the economy needs to add closer to 300,000 jobs each month, economists say. “The jobs deficit remains large, and we will need much faster job growth than we saw in 2010 to simultaneously bring people back into the labor force and reduce the unemployment rate to acceptable levels over the next few years,” said Chad Stone, chief economist at the Center on Budget and Policy Priorities.

And at first glance, the Labor Department’s various jobless rates make December look like a good month for job seekers. The headline unemployment rate dropped to 9.4 percent from 9.8 percent in November, and the real jobless rate—the one accounting for part-time workers, “marginally attached” workers, and more—dipped slightly to 16.7 percent from 17 percent. December marks the 20th straight month with unemployment over 9 percent, the worst jobs crisis since World War II. Meanwhile, the number of unemployed workers decreased by 556,000 to 14.5 million people, and the long-term unemployed (those out of work for more than six months) held steady at 6.4 million, or 44 percent of all jobless workers.

But jobless rates can be deceiving. One crucial statistic to look at is the percentage of working-age people who are actually in the labor force. In December, that figure edged downward yet again, to 64.3 percent. That’s the lowest it’s been since the early 1980s, and as Calculated Risk notes, down from the normal 66 to 67 percent over the past two decades. In other words, about the same percentage of working-age people collected a steady paycheck in December as did during the Reagan presidency.

And that’s why you shouldn’t get too excited about that lower, 9.4 percent unemployment rate. It’s not that the job market is necessarily improving, but that people are still dropping out of the labor market and making the pool of officially unemployed workers look smaller than it really is. These are people who’re tired of sending out cover letters and resumes, attending job fairs, scouring online job boards. To wit: the number of workers who’ve dropped out of the labor force increased by 1.5 million between December 2009 and December 2010.

The December job figures are especially deflating after a private employment report from earlier this week suggested big gains in the labor market. The December employment report from ADP, a business data analysis outfit, reported that private employers added 297,000 jobs in December. But Friday’s government report seems to validate ADP’s skeptics, who say the firm isn’t all that accurate, especially during the holiday season when jobs numbers fluctuate more than usual.

So how distant is a full jobs recovery? Think of it this way: If the economy adds 150,000 jobs per month going forward, then it will take around 20 years to get back to the pre-recession employment level of 5 percent, according to the Economic Policy Institute’s Heidi Schierholz. Really, the question isn’t when we’ll get back to normal but if we ever get there at all.