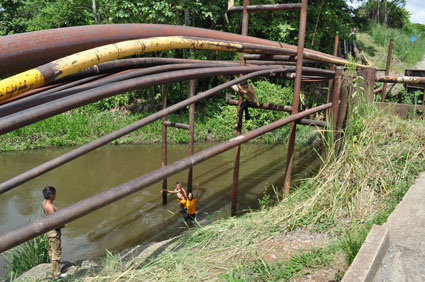 A small court in the town of Lago Agrio, Ecuador, has ordered Chevron to pay plaintiffs from indigenous communities and their defense $9 billion for environmental damages. A handful of tribes, represented by attorney Steven Donzinger,  accused Texaco—now Chevron—of deliberately dumping 16 billion gallons of toxic oil-production sludge into Amazon rivers and streams, abandoning 900 unlined pits of heavy metals dumped by the company; and failing to fix oil-pipeline leaks throughout the region. The judge also demanded Chevron apologize publicly, lest the fine be doubled.

But Chevron has been preparing for this outcome for almost as long as the complex battle has been raging. Chevron is trying to take the issue to the Hague’s international arbitration court—a legal mediation process that the indigenous plaintiffs would be conveniently left out of, as only countries are party to the relevant international Bilateral Investment Treaty [PDF]. There’s also the ongoing battle over allegations of plaintiff extortion.

But the plaintiffs are ready to fight back: They have new funding from Burford Capital, as well as an addition to their legal team, DC law firm Patton Boggs, which filed a lawsuit against the oil giant for its underhanded interference in the legal proceedings and efforts to drain the group of financial resources.

When a Chevron spokesperson said, “We will fight this until Hell freezes over and then we’ll fight it out on the ice,” Amazon Defense Coaltion‘s Karon Hinton responded, “We have our skates on.”

The next step comes on Thursday, when both parties will file the first of three possible appeals in the Ecuadorian courts. Chevron, of course, will appeal the most recent decision, while the plaintiffs will argue for higher damages to be awarded. The hope, said Hinton, is to repay some of the families for loss of life, mostly from the high cancer rates that have been linked to the pollution. “People have lost their loved ones, their family members. An Ecuadorian life is just as valuable as an American one,” she said.