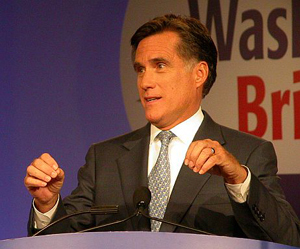 On Saturday night, Mitt Romney gave his first major speech of the 2012 presidential campaign at a Lincoln Day dinner in New Hampshire. Romney discussed health care, the economy, and President Obama, but mostly the speech was an attempt at something the former Massachusetts governor has become quite adept at: re-branding. MSNBC’s First Read nails it:

This, in short, is Romney 3.0. Romney 1.0 was the socially moderate businessman who won election as Massachusetts governor in 2002. Romney 2.0 was the socially conservative presidential candidate who ran to John McCain’s and Rudy Giuliani’s right on abortion, stem cells, and illegal immigration in 2007-2008. And Romney 3.0 appears to be the repeat presidential candidate who will focus more on the economy and his business record than on social issues. Yet as the New York Times’ Zeleny writes, Romney’s transformation also applies to his appearance. “Mr. Romney is trying to present a more relaxed image to combat impressions that he is unapproachable and stiff. He has not been seen in a necktie for months… He turned up in the pit area of the Daytona 500 last month, mingling with race car drivers while wearing a Bass Pro Shops shirt. And last week, Mr. Romney, who put his wealth four years ago around $200 million, walked into Tommy’s Barber Shop in an Atlanta strip mall for a haircut.”

Romney 3.0 is how we all thought he was going to run at the beginning of the 2008 cycle. And it’s closer to his true political identity (though we still don’t know about some of his social policy stances which have, um, evolved over the last two decades). But this could be a constant theme of the 2012 campaign: Where was this Romney in 2008? Could this Romney have won in ’08? Etc. As we — and others — have pointed out, the challenge for Romney will be if he can sell yet another political re-invention. “During a weekend speech to New Hampshire Republicans, Mitt Romney delivered what will likely be his most durable rejoinder to critics of the universal health care program he signed into law while governor of Massachusetts,” the Boston Globe’s Glen Johnson reported. “Still remaining, though, is a lingering, fundamental question about his authenticity that has only been perpetuated by recent appearances.”