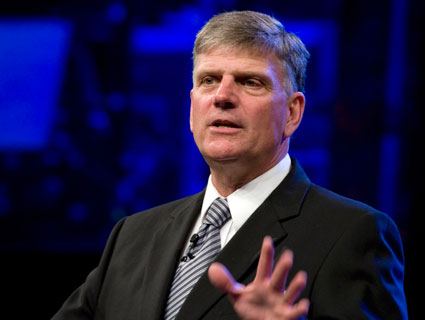 The day after Easter, the Obama White House took a shot at one of the nation’s more prominent religious leaders—albeit a careful and restrained shot.

For Easter Sunday, the producers of ABC’s This Week thought it would be good programming to have host Christiane Amanpour chat with Franklin Graham, the evangelical leader and son of legendary evangelist Billy Graham.

Amanpour introduced Graham as a religious leader “who continues his father’s crusades, preaching to millions of people around the world. He also serves as the president of Samaritan’s Purse, an international aid organization that does relief work in the developing world with missionary zeal.” She neglected to mention that Graham has called Islam “a very evil and wicked religion and that last year Graham was disinvited from a National Prayer Breakfast event at the Pentagon after his Islam-bashing became an issue. Nor did she note that last month Graham claimed that the Muslim Brotherhood has “infiltrated every level” of the Obama administration.

Her first question to Graham was a softball: “What’s the word that you most dearly associate with Easter?” He replied, “It’s God’s love, it’s the sacrifice of Jesus Christ.” Moments later, he contended that the government has undermined the traditional church function of assisting the poor because it took this mission “away from the church, and…had more money to give and more programs to give, and pretty soon, the churches just backed off.” He went on to note that “we are in the latter days” and that when the anti-Christ comes, “He’ll have an economic mark that will be on [his] forehand.” Whatever that means.

Amanpour eventually raised Graham’s “controversial comments about Islam,” without noting what they were. To which he responded, “I love Muslim people. I don’t believe that Muhammad can lead anybody to Heaven.” She did not press him further on this front. She devoted more time to whom Graham fancies among the potential 2012 GOP candidates. After Graham remarked that celebrity mogul Donald Trump might be his candidate of choice, Amanpour asked whether Trump’s unrelenting advocacy of birtherism bothers Graham. Not at all, Graham replied, adding that the president “has some issues to deal with here” regarding his birth certificate. Graham also questioned whether Obama was truly a committed Christian—though he did acknowledge that “God is the only one who knows his heart.”

And that was it. Amanpour allowed Graham to drop a birther bomblet without forcing him to defend his remarks, as well as squeezing in some doubt about the authenticity of the president’s Christian beliefs. The interview was an Easter gift to those on the right who believe the president is a secret Muslim plotting the end of the United States of America. ABC News had provided a much-coveted platform to a fellow who has publicly said Obama’s government is riddled with Muslim Brotherhood agents at the most senior levels—that is, someone who promotes conspiratorial crackpottery.

Graham’s birther-friendly remarks did catch some attention on the Intertubes. But there was not much controversy about his appearance on the show. On Monday afternoon, at the daily White House press briefing, I asked press secretary Jay Carney if the White House was concerned that a national religious leader was charging that Obama has been shifty about his birth records and has allowed the Muslim Brotherhood to penetrate his administration. Carney offered this in reply: It was “unfortunate” that Graham “chose Easter Sunday to make preposterous charges.” There was a touch of anger in Carney’s voice, but just a touch, and he did not elaborate. He then left the lectern and departed the briefing room.

Obama has been quite kind to Graham’s ailing father and has prayed with the elder and younger Graham. Despite that, Franklin Graham spreads conspiratorial swill about the president—without much challenge from the media. And the White House obviously calculates it can only go so far in publicly denouncing Graham. Consequently, there’s not much disincentive for Graham to change his ways. How long might it be before Graham asks to examine Obama’s forehand?