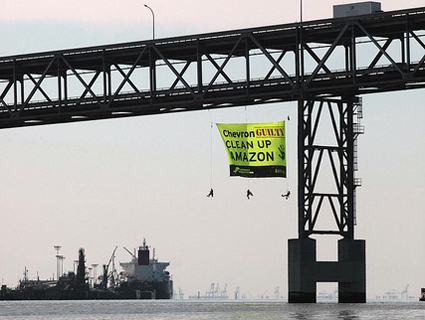 Members of the Rainforest Action Network rappel off the Richmond Bridge Monday morning in Northern California to string up a banner that reads "Chevron Guilty: Clean Up Amazon."Photo: RAN

Anti-Chevron activism has been at a fever pitch this week in advance of the oil giant’s annual shareholder meeting on Wednesday morning. Yesterday saw the release of Global Exchange’s third annual alternative “The True Cost of Chevron” report, which highlights the company’s bad behavior in the past year. Other environmental groups are taking their usual public condemnation of the divisive company to new heights (check out that photo of the Richmond Bridge in Northern California), and working to hit Chevron where it hurts—in the moneymaker. And Chevron’s shareholders appear to be listening.

Much of the controversy surrounding Chevron stems from its knock-down, drag-out legal battle in Ecuador. Eighteen years ago, a lawsuit brought against the oil conglomerate by a group of Ecuadorian citizens alleged that Texaco Inc. (which was owned by Chevron at the time) spent decades dumping chemical-laden waste into the Amazon, causing major environmental damage and widespread health problems. This February, an Ecuadorian court ordered Chevron to pay up to $18 billion in damages—a sum comparable in size only to BP’s promised $20 billion. The ruling is currently under appeal.

Despite the upheavel, in its newly-released annual report, Chevron gives itself glowing reviews for a job well done. But Trillium, a watchdog company dedicated to sustainable investment, sees things differently—it released a letter to the Securities and Exchange Commission (SEC) on Friday requesting an investigation into Chevron’s report and asserting that Chevron’s shareholders are being misled about the company’s finances. Chevron, the letter says, tells its investors that the lawsuit is “fraudulent” and of no consequence, but then refers to the “irreparable damage” such legal conflict will have on its company. “This is not the first time that we have felt that the confidence of [Chevron] may be overstated,” says Trillium’s Shelley Alpern.

Chevron, for its part, is not impressed with the letter. “The referenced report is anything but independent,” the company said by email. “It was commissioned by Rainforest Action Network and Amazon Watch, groups that have been funded for years by the plaintiffs’ laywers to pressure Chevron into a settlement of the fraudulent Ecuador litigation.”

But some of the company’s investors are already on board with Trillium. Today, the New York State Common Retirement Fund—the third largest fund in the United States—released a letter co-signed by a coalition of Chevron’s investors (worth about $150 billion in assets under management) asking the company to reexamine its stance on the Ecuador case—which to this point Chevron has vowed to fight “until hell freezes over.” New York comptroller Thomas DiNapoli, the trustee of the fund, asked Chevron’s board to settle the lawsuit years ago, and is reiterating that request with this letter. He’s also sponsoring a resolution asking Chevron to appoint a director with significant environmental experience. Mitch Anderson of Amazon Watch says, in a nutshell, “they’re asking [Chevron’s] management for a settlement and for a fresh approach to the case.”