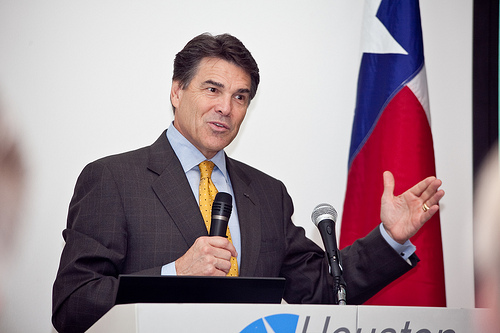 After Mitch Daniels and Mike Huckabee decided against entering the 2012 presidential race, some Republicans continue to hope that another big-name contender—Jeb Bush? New Jersey governor Chris Christie?—will enter the race and liven up a GOP field short on serious challengers. One name often tossed out is Texas governor Rick Perry, a red-meat social conservative beloved by the tea party with national star power.

But there’s one problem: Republicans in Perry’s home state wouldn’t even vote for him if he ran for president. That’s the big takeaway from a new poll by the University of Texas and the Texas Tribune, which found that only 4 percent of Texas GOPers would vote for Perry if he ran. “This is a major question for a guy who’s getting national buzz,” said pollster Daron Shaw. “He hasn’t convinced Texans that he’s a presidential frontrunner.”

The favorite among Texas Republicans, the poll found, is Sarah Palin, who hasn’t announced whether she’s running or not in 2012. Newt Gingrich finishes a close second, with 11 percent, and Rep. Ron Paul (R-Tex.) and Mike Huckabee take third with 10 percent. Former Massachusetts Governor Mitt Romney and Rep. Michele Bachmann (R-Minn.) each claimed 7 percent.