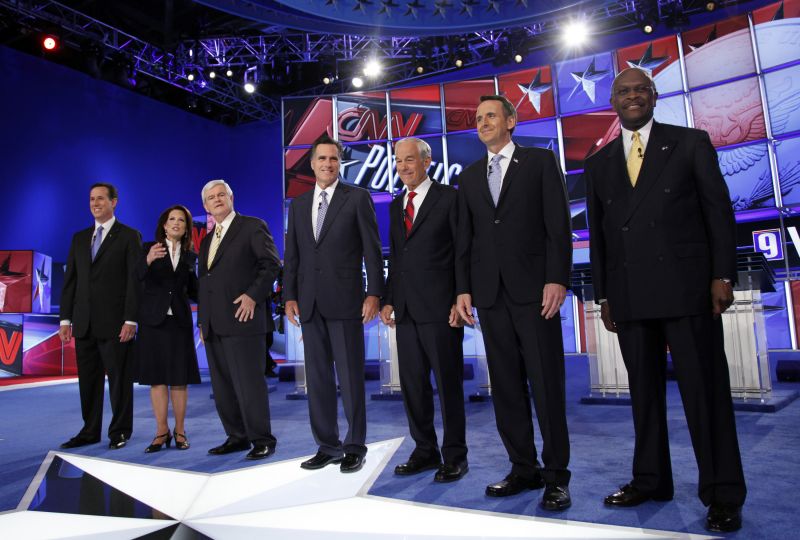 For all the talk of Sharia law and same-sex marriage and Coke-versus-Pepsi, Monday night’s Republican presidential debate somehow avoided any serious discussion of the one issue Americans care most about: the economy. As MSNBC’s First Read noted, apart from the usual empty rhetoric about tax cuts and deregulation, “not a single GOP presidential candidate offered a convincing plan on how to create jobs.”

How can that be? Well, for starters, many of the GOP’s contenders have yet to come out with credible, substantive plans to breathe life into the labor market and ramp up economic production in the US. For all their criticism of President Obama’s handling of the economy, candidates like Rep. Michele Bachmann (R-Minn.), former House speaker Newt Gingrich, and even frontrunner Mitt Romney have yet to offer serious ideas of their own. With that in mind, it’s not surprising the GOPers shied away from tough economic questions at the debate, and instead went on the offensive, saying Obama had “failed the American people both on job creation” (Romney) and that his economic report card “has a big failing grade on it” (Bachmann).

The one GOP contender who has laid out an economic plan is former Minnesota governor Tim Pawlenty. If anything, his agenda has undermined his credibility as a candidate. There’s his laughable “Google test,” in which he said that if “you can find a good or service on the Internet, then the federal government probably doesn’t need to be doing it.” Does that mean Pawlenty would outsource national defense, education, prisons, food inspectors, and fire departments?

Even more dubious is Pawlenty’s promise to increase annual GDP growth to 5 percent by stripping away regulations, slashing tax rates, and cutting spending. Pawlenty pointed to both the Reagan and Clinton administrations as evidence that 5 percent is a realistic goal. In fact, Reagan and Clinton enjoyed economic growth of 3.5 percent, and in Clinton’s case, the economy grew after Clinton raised taxes on the wealthy, not cut them.

Exhibit A in how massive tax cuts don’t help the economy are the 2001 and 2003 Bush tax cuts. Slate‘s Dave Weigel recently asked Pawlenty how he thought tax cuts would boost the US economy, considering how miserable of a failure Bush’s buffet of tax cuts were:

WEIGEL: “After the Bush tax cuts we got slightly less revenue, we got a larger debt. You’re talking about tax cuts as part of a larger plan that will grow the economy, reduce the deficit over the long term. Why would that work when the Bush tax cuts didn’t?”

PAWLENTY: “Keep in mind, our plan does not just cut taxes. It cuts spending. Big time. So as people look back to the historical examples, there’s been other chapters where tax cuts have been enacted, and almost always they raise revenues if you just isolate the effect of the tax cuts. But I think they didn’t fully serve their intended purposes, because at the same time, past Congresses and administrations also raised spending. That’s not what we’re proposing. We’re not proposing to cut taxes and raise spending. We’re proposing to cut taxes and cut spending, and if you do that we’re going to grow jobs by shrinking government. We’re going to grow the private sector by shrinking government.”

With long-winded, vague answers like that, it’s no wonder Pawlenty didn’t go hog wild on economics in last night’s debate. The Bush tax cuts “didn’t fully serve their intended purposes”? What does that even mean? If cutting taxes for the rich was intended to shift more wealth to the wealthiest Americans, then by all accounts they did what they were intended to do. Since 2001, the average household income for the top one percent of earners has leaped from $1.1 million to about $1.8 million; for the middle 60 percent of earners it has flatlined. And as my colleague Stephanie Mencimer reported, people making over $3 million a year enjoyed an average tax cut of $520,000 thanks to the Bush tax cuts—more than 450 times the average middle-income family’s cut.

Jobs and the economy will surely figure into future presidential debates more than they did last night. They have to. Americans demand it. But will we hear any legitimate plans from the Republican candidates? Don’t hold your breath.