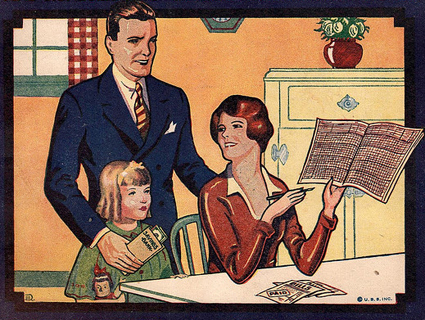 Tea party activists and members of Congress have a story they like to tell about the fight over raising the federal debt ceiling. It goes like this: If American families ran their households like the federal government, we’d all be bankrupt. It’s a pretty common line. So when the Tea Party Express took to Capitol Hill on Wednesday for a hastily arranged (and sparsely attended) rally to urge Republicans to “hold the line” in the debt ceiling fight, it was no surprise that the family-government comparison was on everyone’s lips.

“I really equate it to the family,” Cindy Chafian, a mother of five who recently moved to Virginia, told me after speaking at the rally, which also drew tea party luminaries like Sens. Rand Paul (Ky.) and Jim DeMint (S.C.). Chafian, who founded a new organization called the Mommy Lobby, acknowledged that government spending cuts can be painful—just like when a family that has to cut expenses, or when she tells her kids they can’t go to the movies because they can’t afford it. But over the long run, Chafian said, things work out and get better.

Melissa Ortiz, the founder of a new group, Able Americans, and a proud disabled tea party stalwart, echoed similar sentiments. “If you raise [the debt ceiling], it’s just like getting a new credit card,” she said, arguing that families have to live within their budgets and the government should too.

The family-to-government comparison is appealing. But in practice, there are huge differences between the federal government and the average nuclear family. “If you want to compare the government to anything, compare it to a business. Typical businesses borrow money and they never pay it off,” argues Dean Baker, the codirector of the Center for Economic and Policy Research. Baker says a corporate board would think a CEO was out of his mind if he came to them and announced that while the company lost money, it had paid off its debt. “Maybe the government is more like AT&T than like me and Joey.”

Baker explains that if tea partiers want to frame the debt debate in terms of family finances, they’d be better off to compare the debt ceiling issue to having signed an apartment lease. “We’re arguing on whether we’re going to send in the rent check,” he said. “We’re deciding whether we’re going to pay our bills or screw someone. We’re talking about making payments on commitments we’ve made.”

The tea partiers, though, don’t seem inclined to view the debate that way, or even to acknowledge that most families have tons of debt they never pay off, namely in the form of big mortgages. They also don’t seem willing to acknowledge that sometimes even a family strapped for cash will seek out a revenue solution, like a second job, akin to the government raising taxes. None of the tea partiers I spoke with was willing to entertain the idea of, for example, letting the Bush tax cuts expire. One man, who was volunteering for a tea party candidate running for a Virginia Senate seat and declined to give his name, even expressed deep cynicism that raising taxes would even do any good. Big companies like GE don’t pay taxes now, he said, so why would they pay taxes if they went up?

Still, the handful of tea partiers who came to Capitol Hill Wednesday didn’t seem quite as willing to drive the economy into a ditch as some media coverage has implied. Chafian, for her part, says, “I’d like to not see [the debt ceiling] raised, but I’m also a realist.” Her husband is a 19-year veteran of the US Navy, so she understands the implications of the government running out of money. If the debt negotiations fail, her family may have to cut its spending. Even so, she still wants to see Congress bring spending more in line with revenue, and also to pass the balanced budget amendment, even though she realizes that making it official would be a long, drawn out process.

The tea partiers also weren’t entirely united about the performance of House Speaker John Boehner (R-Ohio), who has been under fire from some tea party groups for not pushing hard enough against raising the debt limit under any terms. “I think he’s doing the best he can with what he has to work with,” Ortiz says. Just like a family?