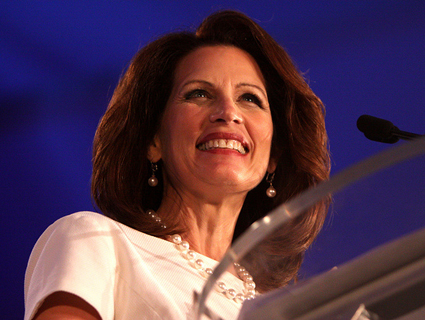 Considering Rep. Michele Bachmann’s crusade against government spending and her demand that America live within its means, you wouldn’t figure her for a conspicuous spender. But after launching her bid for the White House, Bachmann has broken with her usual frugality and shelled out some serious cash on a stylist in what could be seen as her own John-Edwards’-$400-haircut moment.

According to Bachmann’s latest campaign finance filings, her campaign spent nearly $4,700 on hair and makeup in the weeks after she entered the presidential race on June 13. Records show her campaign made three payments of $1,715, $250, and $2,704 to a Maryland-based stylist named Tamara Robertson. Robertson’s LinkedIn profile says she works as a makeup artist at Fox News in the DC area. She’s also listed in the “Make-up” section of the credits for the Citizens United-produced film A City Upon a Hill, hosted by Newt and Callista Gingrich—a pair who’ve raised eyebrows with their own spending.

Bachmann’s hefty hair and makeup tab in recent weeks far surpasses what she’s spent in the past. A review of her campaign records shows less than $1,000 in similar spending last year, which includes her 2010 congressional reelection bid. (A Bachmann campaign spokeswoman did not respond to a request for comment.)

Even when Bachmann’s campaign has paid for these kinds of services in the past, the costs have been far more modest. In February, the Minneapolis City Pages quoted a celebrity stylist named Natalie Hale saying that Bachmann paid her $225 for three different makeup sessions during the 2010 campaign. Hale added, however, that Bachmann tried to avoid paying for such services when possible. “I know for a fact if Michele has to pay for makeup she will usually instead do it herself,” Hale said.

Not so anymore, it seems. Perhaps the spotlight and nonstop scrutiny of the presidential campaign have convinced Bachmann of the need for pricey stylists. But will Bachmann’s $4,700 bill hurt her in the eyes of the fiscal conservative who’ve taken to heart her message on spare spending?