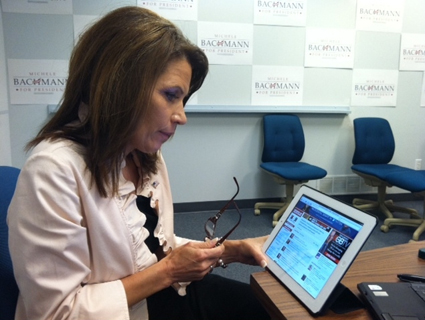 As a general rule, if you’re a candidate for higher office and you’ve previously bragged about attending conferences devoted to Biblical prophecy, you should avoid saying things like this:

[Bachmann] hailed the tea party as being common-sense Americans who understand government shouldn’t spend more than it takes in, know they’re taxed enough already and want government to abide by the Constitution.

“I don’t know how much God has to do to get the attention of the politicians. We’ve had an earthquake; we’ve had a hurricane. He said, ‘Are you going to start listening to me here?‘ Listen to the American people because the American people are roaring right now. They know government is on a morbid obesity diet and we’ve got to rein in the spending.”

Bachmann’s remarks came at a tea party rally in Sarasota, Florida on Sunday. Hurricane Irene was thankfully not as bad as it could have been (and the earthquake wasn’t very bad at all), but it still took an enormous economic toll on the East Coast and has caused serious flooding in upstate New York and Vermont, which are not part of Washington. The wisdom of using it as a political bludgeon is questionable to say the least.

But it’s also kind of an odd point to make. Congress is in recess for the month of August, and about a fifth of the chamber is actually in Israel right now. President Obama was out of town as well. The “politicians,” of which Bachamnn is one, were for the most part not affected by the storm. Which isn’t to say God’s not infallible—but maybe Michele Bachmann isn’t.

Update: Spokeswoman says Bachmann’s comments were “clearly in jest.” I think the point stands, though, that this is kind of a risk for a politician who has publicly dabbled in Biblical prophecy before.