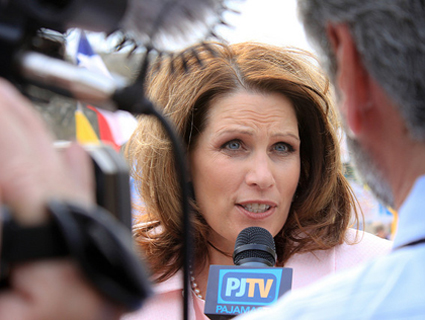 It’s tough to get inside Michele Bachmann’s tent at the Ames Straw Poll. Just a few yards away from Herman Cain‘s headquarters, where you can walk right up and grab a slice of Godfather’s Pizza, the line stretches well out the door—and it’s moving especially slowly because only Bachmann supporters are allowed in. It’s also where I found Rick Green talking about “moral relativism.”

Green, dressed in blue jeans, glasses, and an American-flag polo shirt, is the co-founder of Wallbuilders, the Texas-based organization that’s “dedicated to presenting America’s forgotten history and heroes, with an emphasis on the moral, religious, and constitutional foundation.” The name is a reference to the rebuilding of the walls of Jerusalem in the Book of Nehemiah. If you know the organization at all, though, you know it as the home of David Barton, whose revisionist history about the faith of the Founders has made him a certified celebrity on the Right. (Mike Huckabee says Barton’s he’s one of the most important authors in America.) In their literature and on their radio show, they construct a clear narrative: America is a fundamentally Christian nation, divinely inspired.

That’s the gospel Green is preaching today in the Bachmann tent. “We’re not just gonna say, ‘oooh everybody’s equal and moral relativism for all!,” he tells the crowd, cowbells ringing. Instead, we need to take a stand, and there is no one better to do that than Michele Bachmann: “She’s got a backbone that’ll make a freight train take a back road.”

Green launches into a short allegory about the Battles of Lexington and Concord, and then, with members of the audience holding up their hands in prayer, revival-style, returns back to the situation at hand: “This is the hour, my friends, that you get to stand guard at the watchtower of freedom.”

Darwin Hofmeister of Ackley, Iowa is standing just a few dozen feet away from the stage. He was a Tim Pawlenty supporter before he switched to Bachmann. “Are you familiar with the Family Leader?” Hofmeister asks me, referring to Iowa’s leading social conservative group. Last month the Family Leader unveiled a pledge that candidates would be required to sign to be eligible for the group’s endorsement—in included, among other things, a vow to oppose gay marriage, fight pornography, and ban Islamic Sharia law (it also suggested that black families were more stable under slavery). “Her and Rick Santorum were the only ones that signed the pledge. And to me that made all the difference”

“I think that’s probably one of the most important issues,” Hofmeister tells me. “All you have to do is look at the riots in London and state fairs and you’ll see a bunch of kids with no values.” So does he agree with Green’s statement that moral relativism is ruining America? “Definitely.”

Bachmann, of course, has taken a stand against moral relativism, which, in the late 1990s, she believed was leading America down the road to totalitarianism. It’s a deep-seated belief that extends back to her admiration for the theologian Francis Schaeffer, whose work Bachmann was exposed to in college. Pundits can parse her words for signs that she has abandoned social issues in favor of mainstream economic concerns, but you don’t have to look far here at Ames to see otherwise.