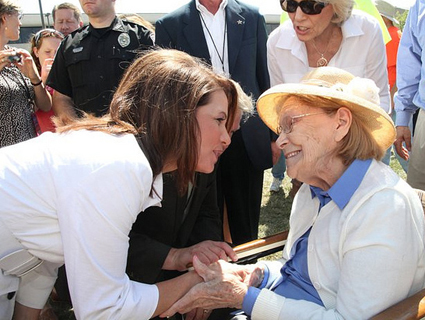 Utah’s Deseret News, which is owned by the LDS Church, has a story out analyzing Rep. Michele Bachmann’s views on Mormons, given that she’s competing against two of them (Mitt Romney and Jon Huntsman) in the race for the GOP presidential nomination. The short answer here is that the Minnesota congresswoman has never actually said much about Mormonism—but the same can’t be said for her pastor:

Although Merritt praised the LDS Church’s emphasis on family and missionary service, he suggested the Mormon faith is “untrue” and “diluted.”

“I very respectfully push back and I say (to Mormons) you have taken something extra and added it to (God’s word) to make all of it untrue,” Merritt said. “Think of it this way: what does your car need to run properly? It needs pure, refined petroleum — it needs gasoline. And what happens when you dilute the gasoline with something like water? The car doesn’t run. I think that’s a good analogy for what our Mormon friends have done with God’s word. … The whole thing is diluted, and honestly it just doesn’t work.”

We went down this path once before, with the to-do over Bachmann’s old Wisconsin Evangelical Lutheran Synod, which taught that the Catholic Church was the Antichrist. Never mind that Catholics (a core constituency in Bachmann’s St. Cloud district) didn’t actually seem to care, and that Catholics and Lutherans have been on pretty good terms since the 30 Years War ended in 1648. It should not come as much of a surprise that Bachmann’s pastor believes that another, substantially different faith, is wrong in important ways. If he thought the LDS Church was spot-on, he would have converted by now; that’s kind of the point.

There are plenty of issues where Bachmann’s religious views conflict with (or inform) her approach to public policy: education, abortion, marriage, and national security, just to name a few. This isn’t one of them.