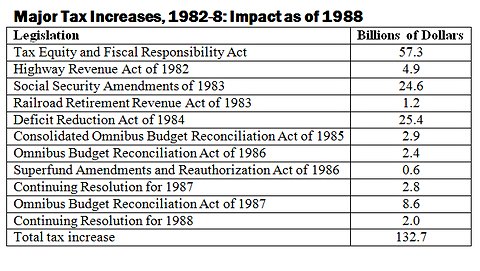 As Bartlett, a former Republican budget official, notes, the Tax Equity and Fiscal Responsibility Act of 1982 was the single largest peacetime tax increase in history. But he also points out that there was still a net tax cut during the Regan years, with revenue nearly $265 billion lower in 1988 than it would have been without the sweeping tax cuts he introduced in 1981’s Economic Recovery Tax Act—half of which he’d taken back by the end of his administration.

That set the stage for…the next twenty-five years of broken tax policy:

It was their inability to simply cut taxes that really made Republicans interested in tax reform, which had historically been of more interest to Democrats. It was only by pairing tax increases with tax cuts that Republicans could keep alive their goal of reducing statutory tax rates. Their ultimate goal has long been to abolish progressivity by having a single tax rate that applies to everyone. . . .

My friend Grover is factually wrong. Spending as a share of the gross domestic product fell after both the 1990 and 1993 budget deals, in large part because of tough budget controls that Republicans abandoned in 2002 so that they could cut taxes without restraint. And contrary to Mr. Norquist’s theory, the tax cuts of the George W. Bush years did not constrain spending, which rose as a share of the G.D.P. almost every year of his administration (as the raw data confirms).

The false mythology of the single tax rate for all, or flat tax, lives on in the campaign promises of Rick Perry, the Texas governor and GOP presidential contender. Perry’s tax plan, which he rolled out this morning in the Wall Street Journal, is to give Americans a choice between a flat tax of 20 percent or their current income tax rate. Kevin Drum already called BS, branding the scheme as a grotesque giveaway to the rich (not unlike Herman Cain’s 9-9-9 and 9-0-9 plans). That, of course, is the point: Republicans haven’t cared about reducing spending for a long time. What they do care about is cutting taxes on the rich.